Jobs I could not do:
Security guard in a shopping complex: well, I wouldn't meet the burlesque stature required anyway, but just the thought of standing for hours in an artificially-lit place . . .
Incredibly famous actor/musician: oh, the crowds, the never-ending attention, the accountants, managers, the money . . . I suppose I could cope if I had to.
Garage worker: the cold, handling metal in a freezing cavern-like space; and of course the ability to be practical in real terms - I'm very practical in my head . . . 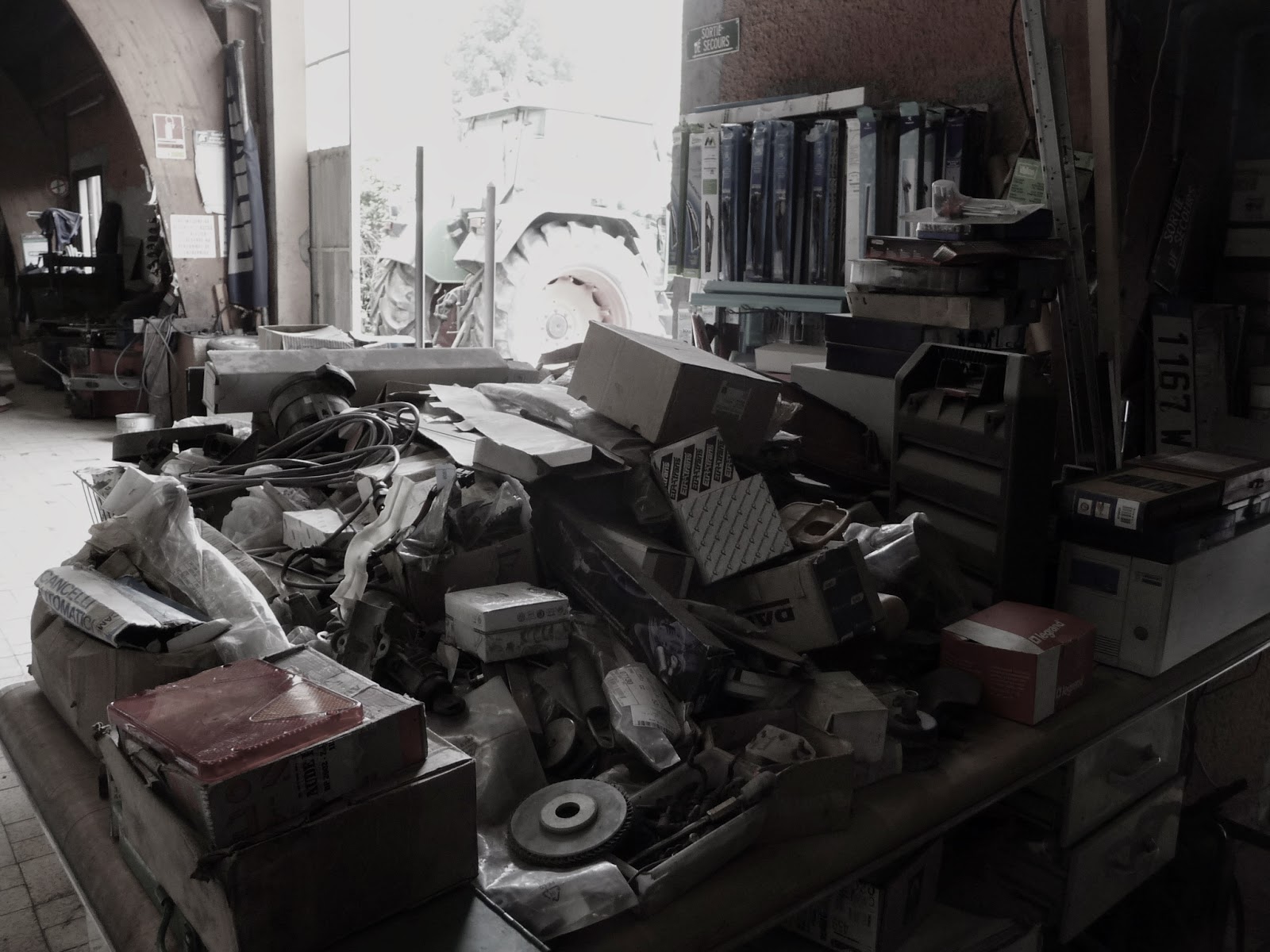 I had to find one yesterday as the car had been warning us for sometime of the need to carry out an oil change. Mark makes great cake, but fiddling around under the bonnet of the car, nope . . . more likely to be me, but this was urgent as a special spanner-shaped light had come on with the word IMMEDIATE.
Saturday on Easter weekend: very unlikely that any garage would be open or if it was they would say:
Madame you are a fool to have not supplied your car with oil, and I am going now to eat copious quantities of lamb with my family and friends - au revoir.
Most of them were shut, and the others said go away, except one that I had once been to when I backed the old car into a gate and the door had fallen off.
Oui madame, he said, this is not a problem. Come down at 11.00 and we will do it for you. 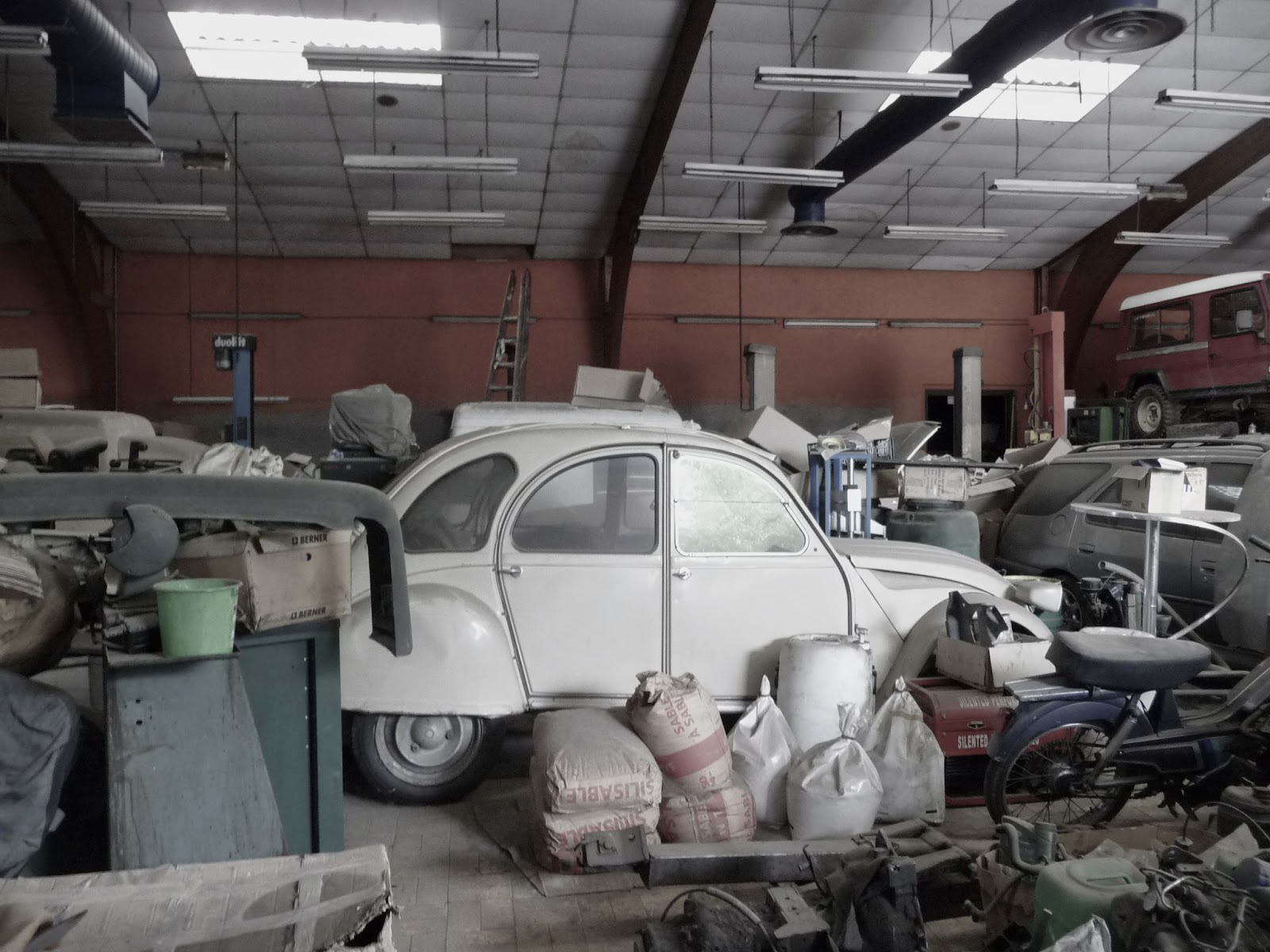 I appeared at the appointed time, and, as the owner was engaged with talking to some other people about lamb, I ignored the 'do not entre as it could be dangerous' sign and wandered happily looking at the massive piles of amputated car bits and the forgotten hulks of vehicles slumbering towards the back of the building. 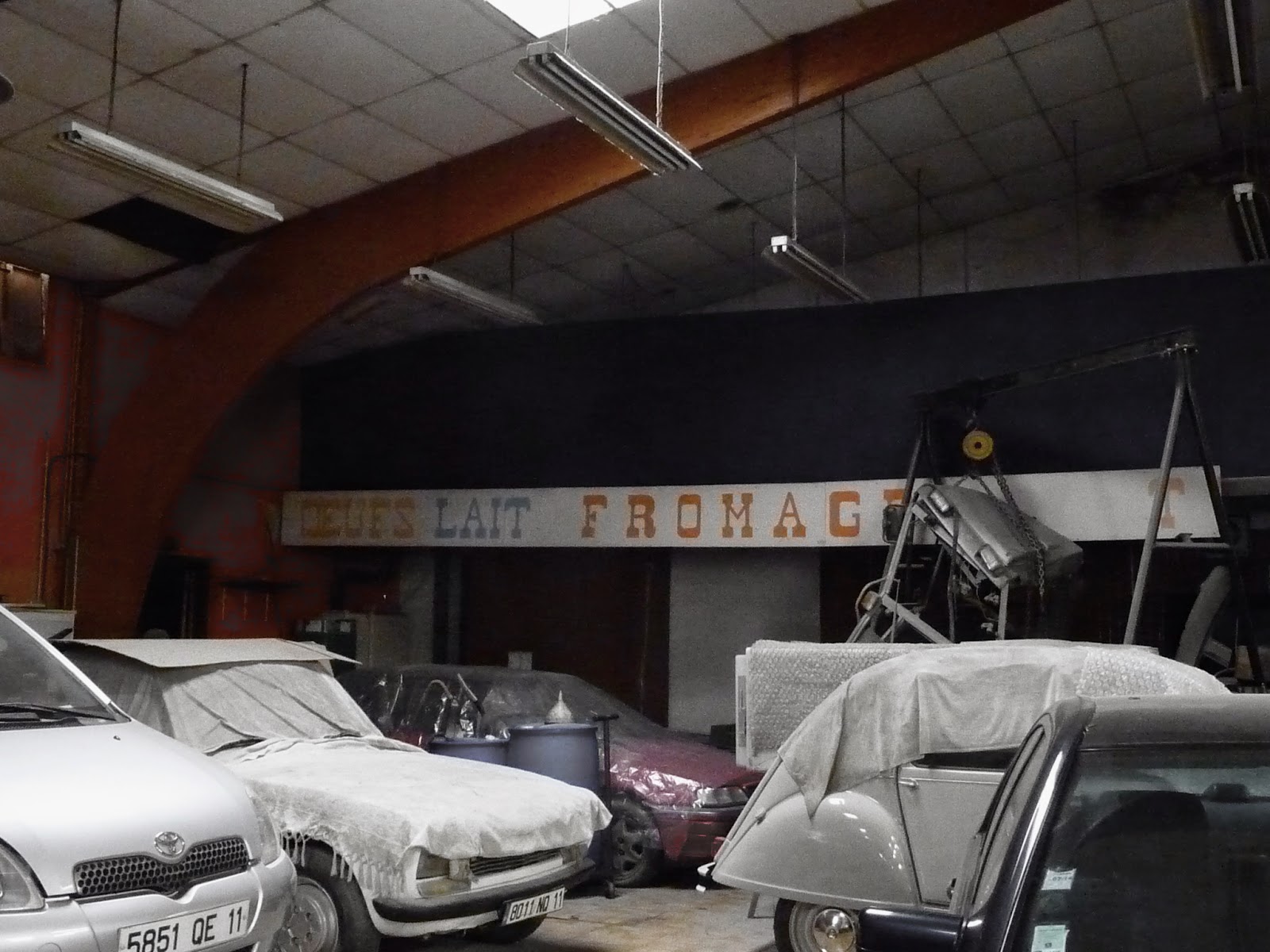 On the back wall I was surprised to see ancient signage: 'Lait, oeufs et Fromage, printed in faded orange 70s lettering.
I asked a mechanic if they still sold eggs and cheese.
Don't be une pillock Madame, we are a garage, not une epicerie.
Actually, he said that the garage is housed in the old Leclerc supermarket, and it just shows how much our town has grown - you could fit about six of the old one into the new 'Hypermarché'. 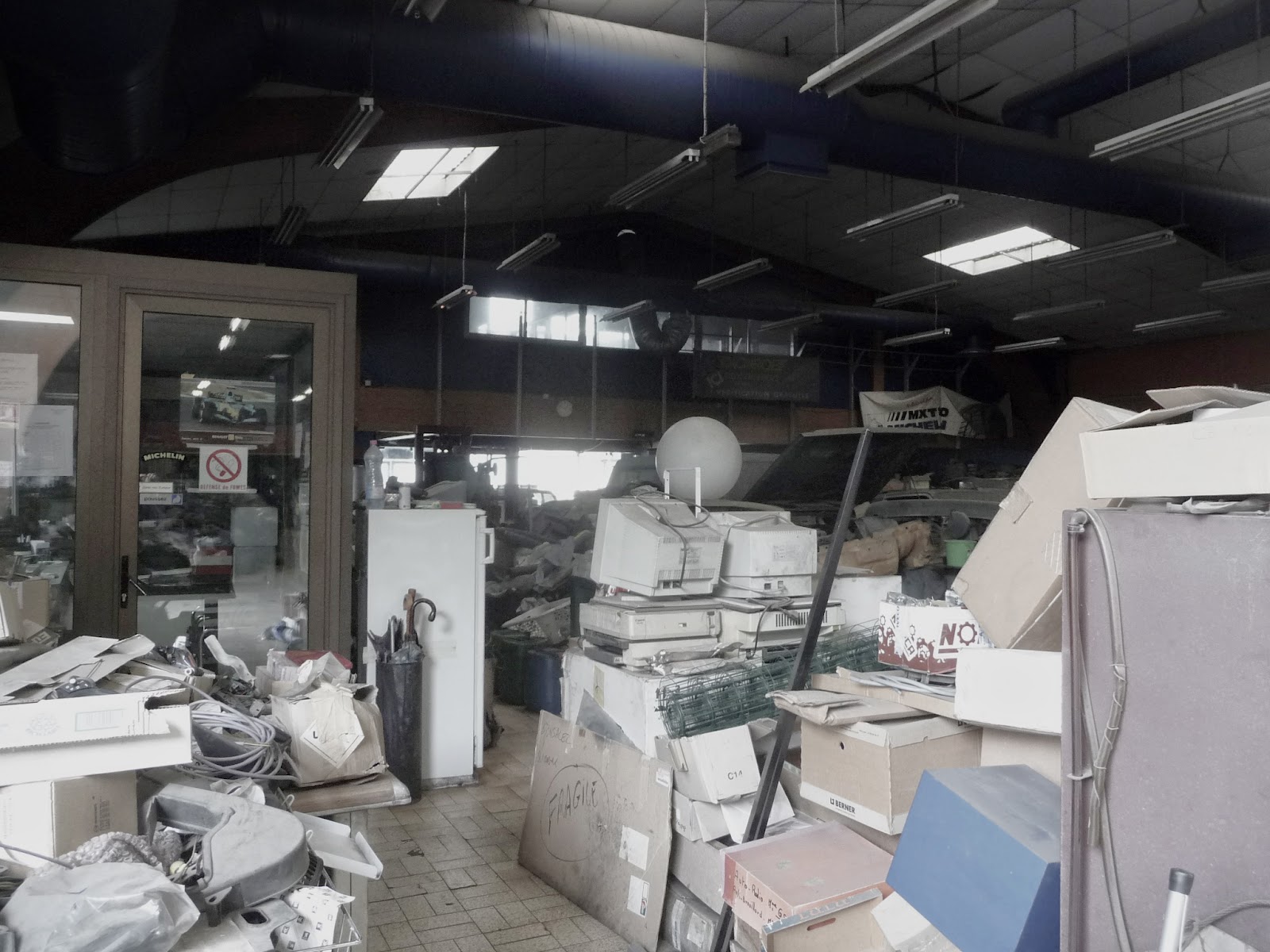 It was 11.30; the mechanic put plastic bags on the car seat, said he would also change the two bald front tyres (which they indeed were) and told us to come back at midi. I questioned his idea of changing two tyres and doing an oil change in half an hour, but he assured me it would be done. And it was.
I was asked to make a RDV to come back, as the baldness was due to the car driving in a sort of knock-kneed fashion. For this I had to enter the nerve centre of the whole garage operation: a small dark space filled with teetering, ancient computers, bits of old pipe and two vast hounds.
I duly made the RDV, thanked them profusely and left to go home in our happy car (now reading 19,000 KM to the next oil change) and eat beans on toast in respect of the Easter celebrations. 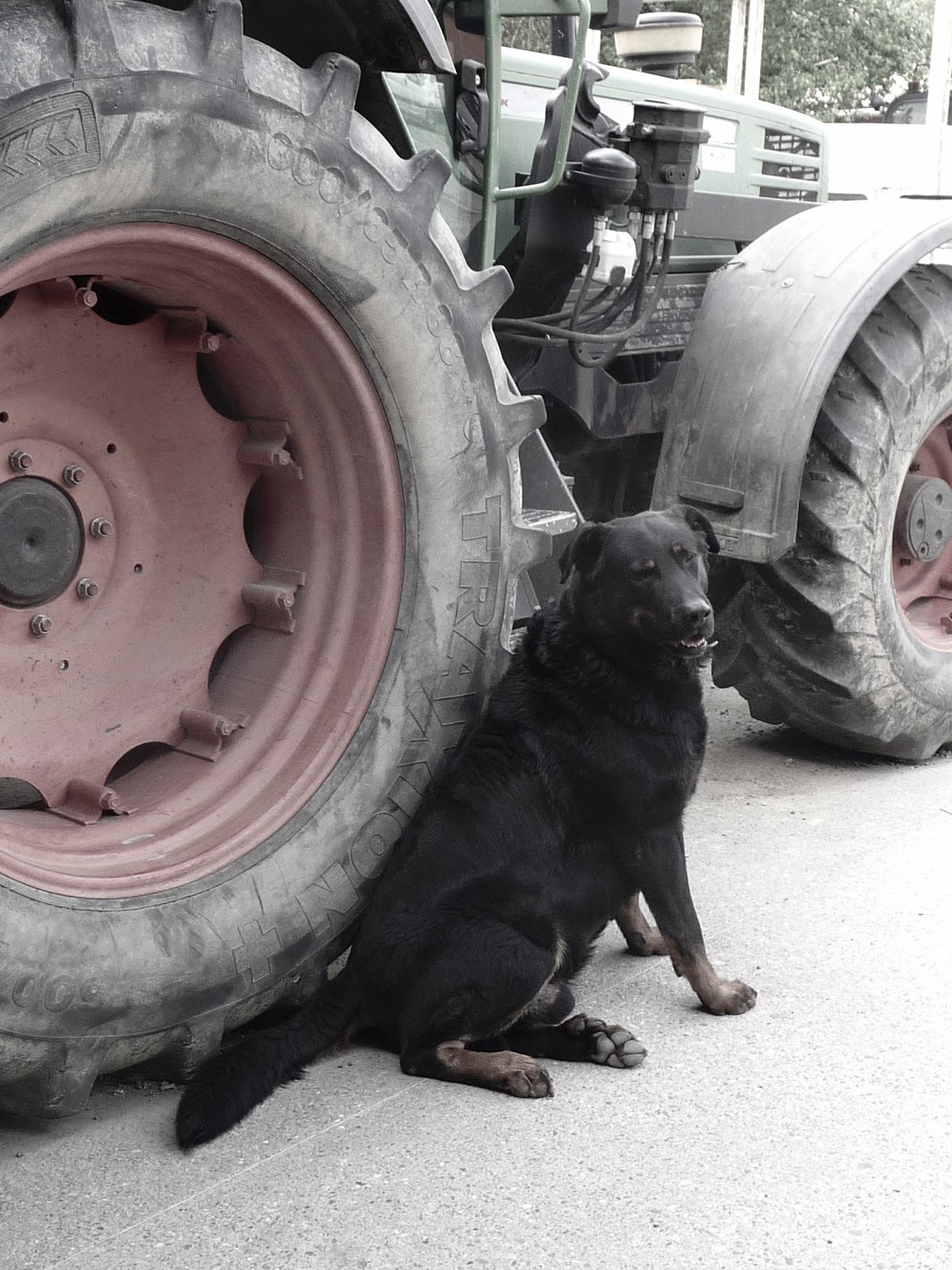 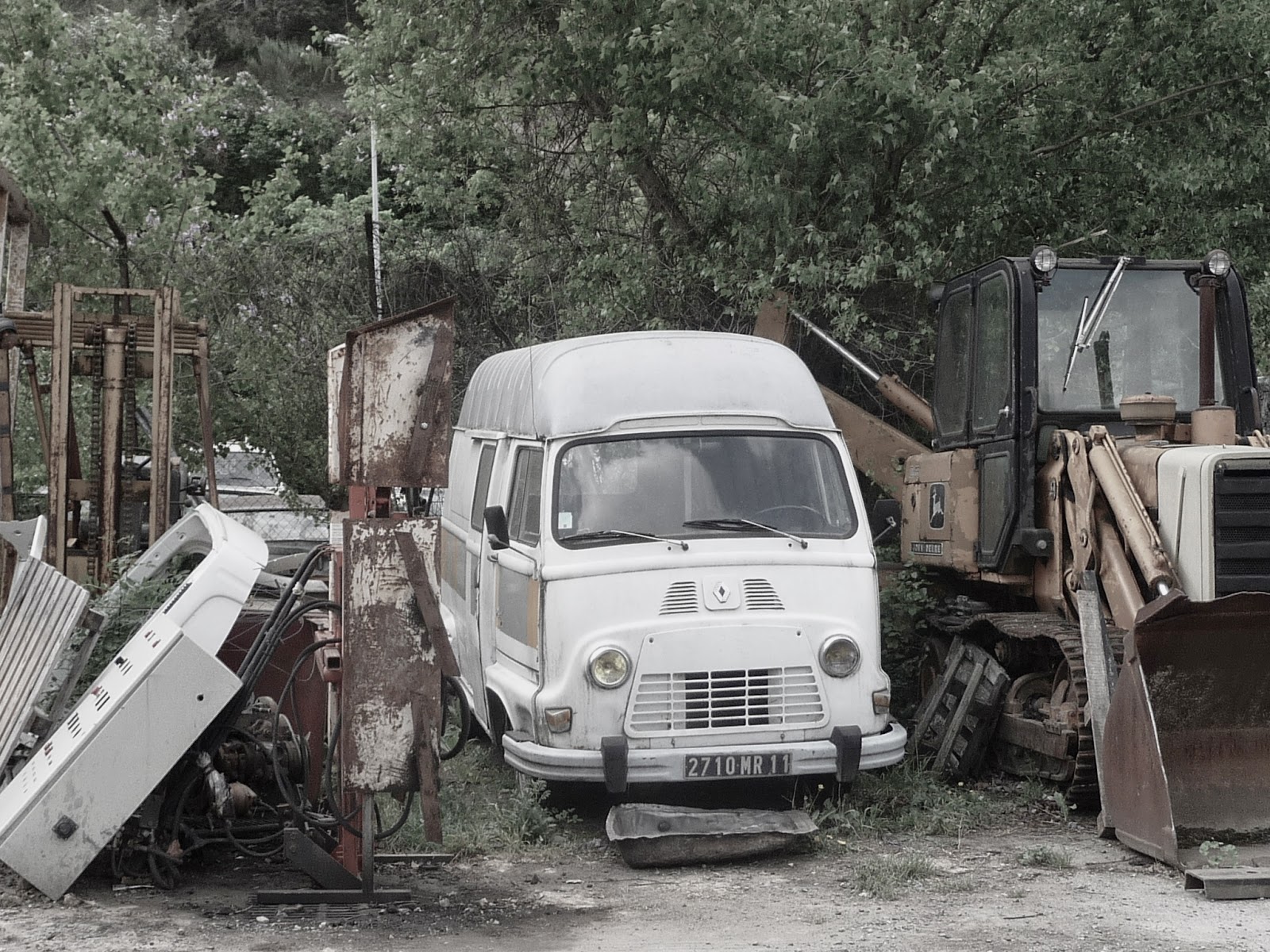 Posted by writing and other stuff at 02:45