This particular one is a well-visited thought, prompted by an email from a friend, well, her brother, but it made her think too . . . in a random way, this morning.

Have you ever wondered if rocks are actually soft and just tense up when we touch them?

Of course not - don't be daft . . . but, then who's to say. Ezra asked me the other day if plants feel pain when you prune them; I said, 'probably not in the way we do', but then maybe the air is actually filled with inaudible squeaks of botanical discomfort. Should I let the garden do its own thing? - leave nature to decide where to put plants, and what length/height they should be, etc. 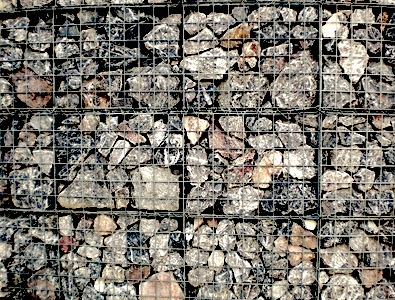 Anyway, rock musing.
When driving down a certain stretch of motorway near Perpignan, Ezra and I have often commented on the rocks imprisoned in wire cages: effective barriers no doubt, but there's something tragic about it - all those pieces of flint and river 'galets' suddenly plucked from the soil and hoisted up, to watch for eternity (or, as long as the motorway continues to exist) millions of cars, and to be gradually tarnished with layers of exhaust deposits . . .  sob.
There is one stage worse however: when the cages are then covered with porridge-like concrete. Slow rock suffocation, no view, no air, no sound; even of a lone car zipping past in the wee small hours . . .
Think I need some tea.

Posted by writing and other stuff at 01:22