The meaning of stuff

I, bizarrely, decided to clean the mantlepiece this morning. The one downside of a wood fire is the vast amounts of dust. I don't usually notice it, and certainly no one else does - perhaps the big dog; she was staring fixedly at a huge, grey cobweb yesterday. Maybe household disorder disturbs her? We'll never know.
Anyway . . . I did - dust, and it was amazing how gleaming everything now looks, in a grey February light at least. And it was an interesting nip back into the past for a while as I thought about the objects that have become fixtures in the part of our front room that becomes so important in the winter months.
A recent friend of mine told me over a cup of tea that she has thrown everything away, or at least given away. Everything. Just a box or two remaining. How incredible that is; I am in awe of anyone who could accomplish such a feat. Sometimes I imagine us moving to a smaller place, and honing down the STUFF. How would you choose what should stay or go, to quote The Clash.
Here's a picture of a small section of the mantlepiece (without dust) and a brief history of the stuff that resides there. 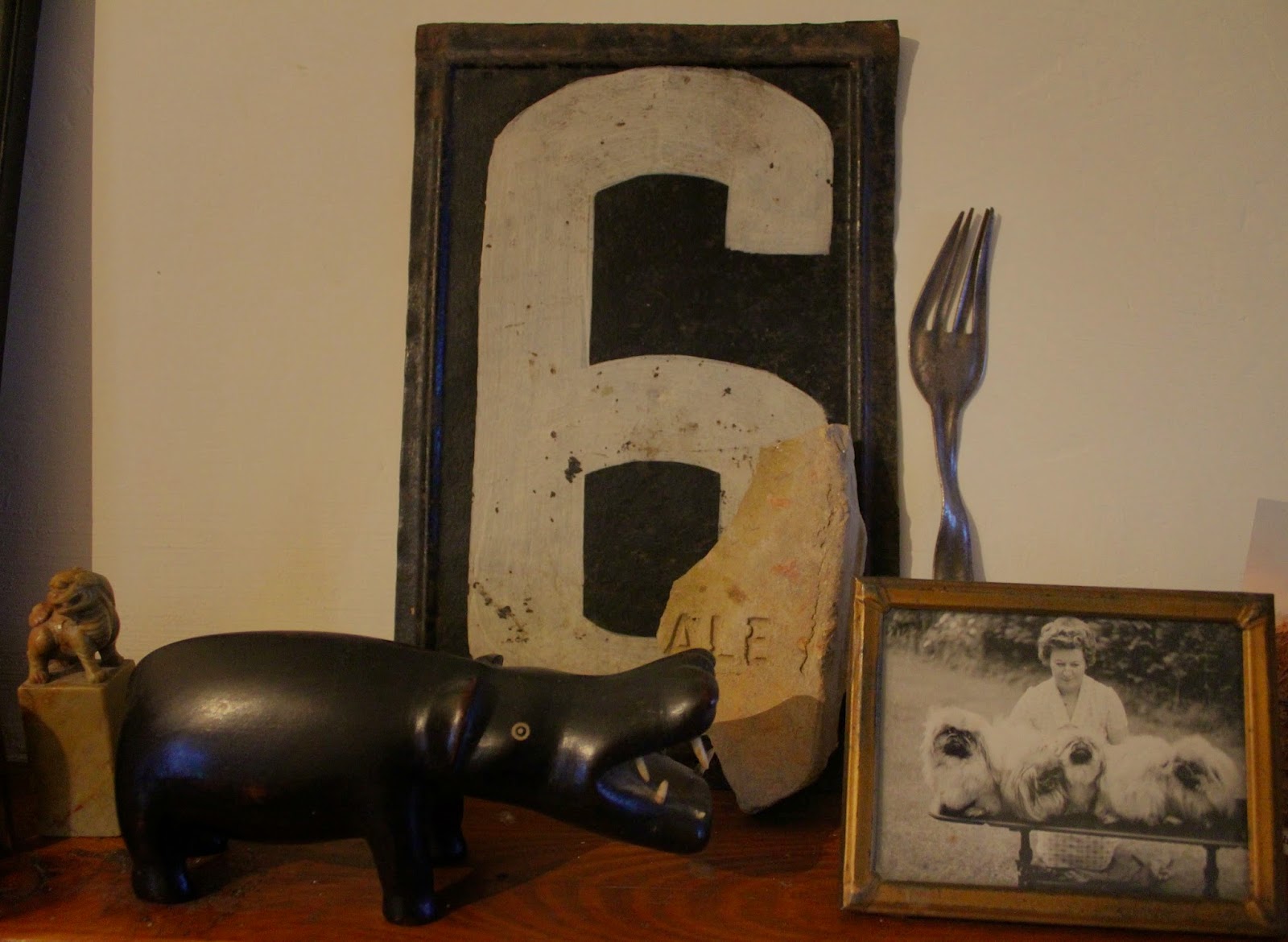 from the left:
A dragon soap-stone letter seal: unusual in that it was from Mark's past. Most of the household clutter is of my doing - other than records and instruments that make up about 50% of the habitable space.
It was his dad's and resided on their mantlepiece until Mark 'borrowed' it to carve his own version in wood; I have it here on the desk and it's rather good.

A hippo that I think came from Brick Lane Market, donkey's years ago. The mantlepiece holds many other wooden creatures from that era.

Metal number 6 from a railway line; a find from a vide grenier/car boot sale, and my lucky number.

A piece of tile from the original Limoux tile factory that Ezra spotted on one of our 'let's walk around a part of town we don't know on this drizzly day' walks. Ale being significant in our family as the title of one of Tommy Trinder's drinking songs in Champagne Charlie, probably our most watched film: ever.
'Ale owd (old) Ale, give me a glass of owd Ale, nothing quite like the juice of the hop, nothing quite like when to know when to stop - give me . . . Ale owd ale' . . . etc.

A flattened fork from another walk around a vineyard. It was the only thing left in an old vinegrower's hut, and I think has featured in a previous post - touched by it as I was.

Ah. Something I could never get rid of. I will have to be buried with it.
A photo of a proud 1960's lady with her hair all 'done nice' in her garden arranging her collection of Pekingese dogs on a coffee table. What more could you want in a photo?

I suppose I could get the really VITAL things into one box if I had to choose: a bit like Desert Island Discs for stuff.

Posted by writing and other stuff at 01:49