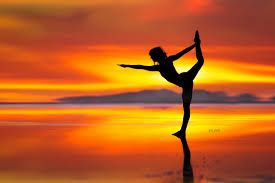 I've been saying 'I'll go to a yoga class' for about twenty-three years, give or take a few months, but for the last two Fridays I have - gone to a yoga class.

When you look up yoga images on the net - such as the above, (thank you, Huffington Post) 99% of the images are of lithe young beautiful people with slim limbs, poised in ligament-wrenching poses in front of impossible sunsets, aqua seas and white-sanded beaches.
Our yoga group was mainly OLDER people: grey haired, a little thicker around the middle than perhaps they (certainly me) would like, but nevertheless, relatively fit-ish. The class was held in a 'bien-être' center (being good to yourself, place) which was a sterile as a dentist's waiting room with a view of a lot of dead grass and a soundtrack of grunting from the adjacent weights room.
BUT! the class was a revelation, both times.
I do exercise each morning; a sort of home made routine of physio, Alexandre Technique and yoga that I have vague memories of from decades ago, but this is so all-consuming, even with the grunting from next door invading one's inner beautiful space.
Even though I've only done two classes, already I feel more supple; legs more energised, less (slightly) stressed about trying to get everything done - and I'm working on this. Maybe I'll add in the other thing I've been meaning to do for the same twenty-odd years - meditation.
I did attend one class back in London on the Hornsey Road where we spend about half an hour examining the complex taste sensations of a raisin and then did breathing techniques of counting to ten slowly and not letting ideas, worries and lists of the following day intrude. I was supremely bad at this but was attracted to the IDEA of it - the idea of being able to really empty the mind of all useless angst and to concentrate only on The MOMENT, etc.
I did wonder if after these two sessions I might think . . . nah, not enough time, another thing to find money for, whatever, but I feel drawn to continue and find out what my not-so-young bod can put up with and, hopefully, embrace.
Posted by writing and other stuff at 10:39