What's it all about?

This year, amongst all the wrapping paper, presents, food prep and celebratory glasses of fizz, I felt there had to be a point where we stopped to think about what this once-a-year madness actually represents.

Some years we have gone to a midnight mass or walked down to a morning service, but as we don't actually visit any churches during the passing months apart from out of a desire to admire their construction and artefacts, joining a service didn't seem particularly meaningful.
Going up to the highest point in the area and really having a think about The World and us in it, did, and up at the highest point near us there happens to be a tiny church which (unlike most churches around here) is always open - probably as there is nothing inside worth making off with.
We drove up the twisting road, let the dogs out for a whirlwind canter around the bald fields (750 meters altitude) had a brisk walk (9 degrees rather than the more balmy 13 down in Limoux) and then visited the edifice with our plaster statue of Christ rescued from a bin at our local recycling place . . .
I don't know what I believe - agnostic? a confused but interested wonderer more likely, anyway, mindful enough to feel that I wished to mark such a hugely fussed-over event in some way other than presents and eating too much.
The church had its usual festive-time decoration of white plastic tree, tinsel, and small nativity scene. I added Christ to the altar with some olive twigs and a candle and we sat for a moment, possibly not doing much more than trying to imagine how the medieval church-builders had fabricated anything so solid and elegant miles up from the nearest settlement without so much as a tile-cutter but it felt oddly moving, more so than standing within a mass of people who, like ourselves for the most part would probably only be there for the one event.
The day has been wonderful, the hours moving slowly as they seem to on the 25th of December as a rule - time spent with your favourite (hopefully) people, in my case, thankfully, yes; many wonderful gifts, food, reading, walking etc, but somehow all the much richer for sitting quietly for a few moments in that small, seldom visited church. 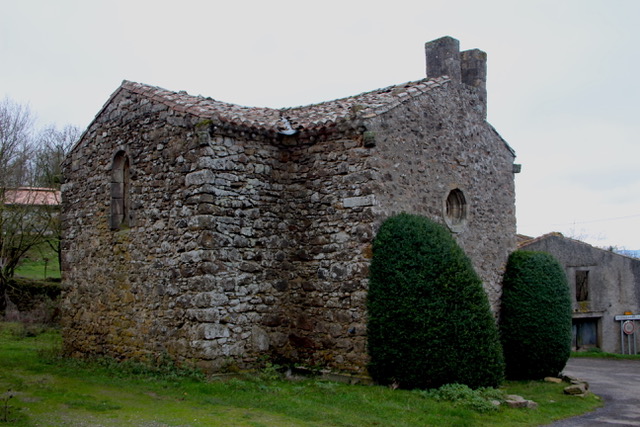 medieval church in the tiny hamlet of St Salvayre near Alet les Bains. 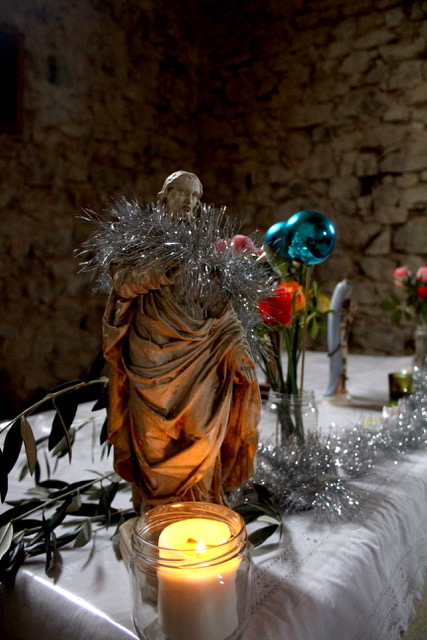 Posted by writing and other stuff at 09:57