Following on from a previous post featuring rescued DVDs from our local, and truly excellent second hand emporiums, Emmaüs and Aspire, here is another recent batch. It has become a slight vice, but a very small and inexpensive one, and it's helping these organisations, and we take the watched-but-not-to-keep ones back, thus continuing the recycle cycle going.

Someone had obviously had a big clear out of their library as there was a whole new selection and some really excellent titles - most of which we had never heard of.

'This England' was magnificent as was 'Dirty Pretty Things'. 'Mickey Blues Eyes', a perfect and silly trip back into late 90s film with Mr Grant, and top left, a surprisingly good romantic comedy with meaningful story and good humour. 'Lucky You' was also really good, and 'Reign over Me'.

We're halfway through watching 'There will be blood' (long film, worthy of not falling asleep in!) which is totally amazing in all ways, harrowing, and incredible, eerie and tense soundtrack. Endless Summer still to go but Mark had picked it up in Aspire with raised eyebrows and said: "Wow, classic!' so I'm hoping it'll be a winner.

There is a smaller pile of films we had started and then stopped due to just sheer awfulness, but at 50 centimes, always worth a shot... They will be heading back next week along with the bathroom sink and shower tray from a spot of demolition yesterday. 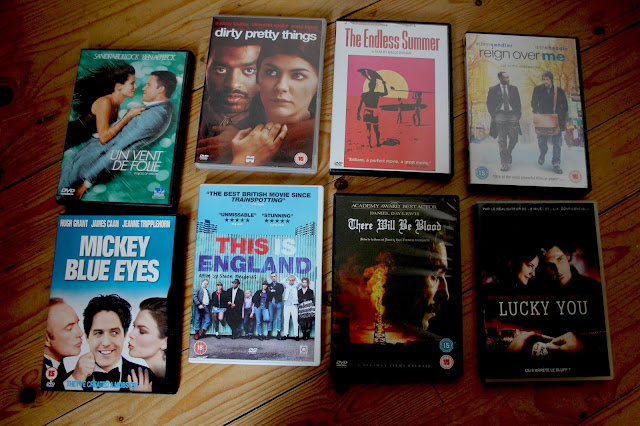 Posted by writing and other stuff at 05:23