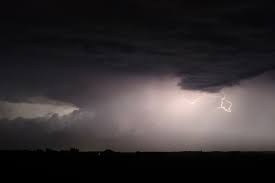 And it was an impressive one...

I don't think I've ever seen so much continual lightning over an hour or so - almost strobe-like. I looked out of our top floor velux windows and considered, as you do when confronted with the full force of nature, how terribly small we and our daily concerns are. Yesterday afternoon I was worrying about the seething mass of mosquito larvae in our new pond, and the fact I had lost the smaller 'tic fork' for removing unwanted guests from the older dog. Seeing the trees bent over at an alarming degree as the wind lashed our home reminded me of the rather bigger picture, part of which is increasingly bizarre weather patterns, or no patterns in fact.

My current novel has reached the point where Londonia residents are leaving the lower flooding states and re-settling on the various higher points of the city - Muswell Hill, Angel Islington, and where my hero and narrator (a fanciful French 18th century couch) currently resides, Hampstead Heath. Living with various dystopian scenarios does make one a little, not exactly gloomy . . . speculative, thoughtful, scared, sometimes.

Anyway, the garden wasn't flooded by our little river that passes through and the only major catastrophe was that the fabulously blousey 'Rambling Rector' rose had parted company with the wall and was bent over itself like a seated someone sleeping off a hangover. Luckily it had been showing off madly over the last few weeks, brightening our days with its pink blooms, and I had taken many photographs. And it will do it all again next year as a friend pointed out.

The thing that made me feel most sad was seeing the birds hopping about on the bowed branches looking for their nest. I found it as we cut the rose back; a beautiful construction of wound long grass, moss and feathers, and four little white/ grey eggs... I put it back in a nook of branches but I doubt very much they will return. I don't possess their delicate skills.

I think I've posted this animated film that I made with son, Ezra before, but it seems most fitting to re-air it on this post-storm morning. The Nest Apprentice. Inspired by a dream of a future time where the relationship between us and the rest of the animal world is somewhat different.

The Nest Apprentice. Story written by Kate A Hardy. Animation by Ezra Lockett.

Posted by writing and other stuff at 03:55