Do you know what God's greatest gift to mankind is?

A question posed to me by a man I gave money to on the Avenue de Belleville yesterday. He had leaned forward from his perch on a bench where he was surrounded by his worldly possessions of a few carrier bags, hands raised, open faced. I had replied, somewhat unnerved, expecting an impromptu sermon on that airless late morning.

He had beamed, demonstrating his own particular wide, toothy smile.

"Bien sur," I had replied, fluttering something in response to his hand on heart gesture. The phrase stuck in my mind the rest of the day and still seems to be there this morning, my face muscles being given a gentle prod away from their tendency to sag into a downward trajectory if left to gravity's influence.

Not one usually for tourist information I had noted somewhere that looked like a slice of Hackney on a site of 'insolite' (quirky, unusual) Paris places and we had taken a long amble from our hotel to Pere Lachaise cemetery including the proposed graffiti embellished street. The said road was actually quite short and not as stuffed with artists and alternative eateries/second hand clothes emporiums, etc, as I had imagined but the whole area was fascinating especially the enormous food market that extends nearly the whole length of the main avenue. As we arrived the vendors were starting to pack up from their early start,  reloading the line of graffiti-covered delivery lorries. I stood for a while watching the chaos as people scrambled to get the useable goods stashed and the mountains of debris cleared away, and could only vaguely imagine the amount of food that comes into the city everyday, displayed in markets and shops, eaten at home or on foot, and cooked in the hundreds of Parisian restaurants. 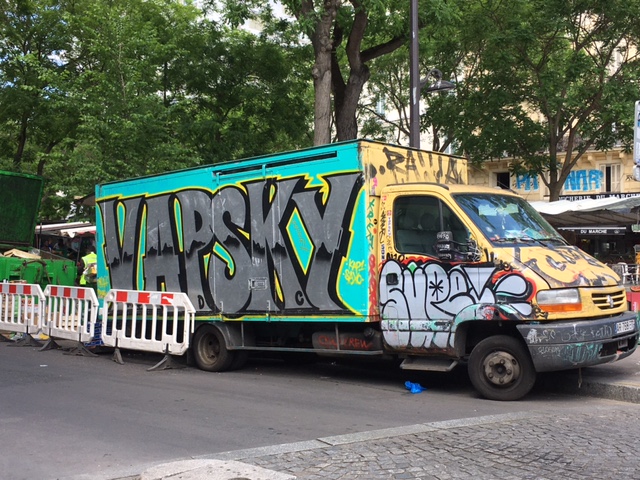 In comparison to Belleville's colourful mayhem, Pere Lachaise cemetery is peaceful and almost silent, its alleyways between the tombs shaded by trees, the light tinted green, almost as if being in a forest glade. We sought out Chopin's grave and Mark stood a while in respectful silence while I mused on the appearance of the less tended tombs with their rusted doors and remnants of plant offerings. At the summit of the hill, clipped lawns invite lounging but it is not permitted. A series of benches however offer a resting point, surprisingly high-up view over the city and observation of the resident crow population. 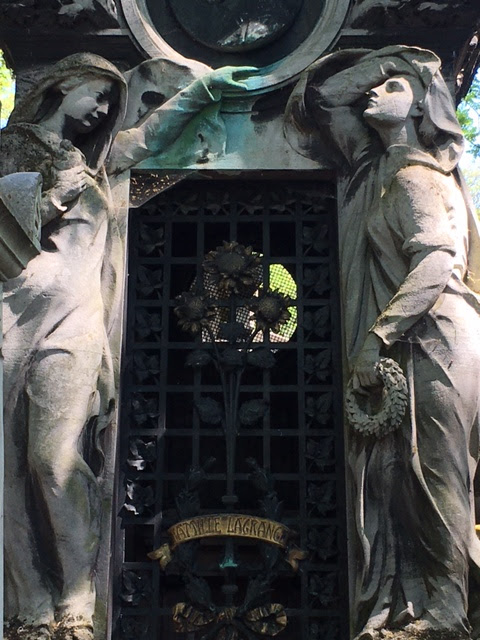 Paris is renowned for its brisk and haughty restaurant staff but during the two days we only encountered one café owner whose indifference to his clientele was spectacular - huffing when I requested a black tea after he had slung a mint tea sachet onto the table to accompany the teapot of tepid water and snatching the ten euro bill from Mark's hand without so much as a merci, Monsieur. All other eateries we experienced seemed to be run by and worked in by friendly and efficient people.
Michelin or similar was never going to be on our menu but we did have a few good brasserie experiences, notably a bistro on Belleville avenue which offered a hearty menu for 15 euros. I don't buy anything much on a city trip, preferring to spend money on sitting about in cafés and observing the locals, or tourists in the more guidebook quartiers. Arriving from a hamlet in the middle of farmland, the sensory overload of a huge city is overwhelming, nowhere more than around the Louvre where the crowds throng, selfie sticks in hand, following flag-holding guides or posing in front of the glass pyramid in carefully chosen clothing. There is no café there for crowd-observing but we sat on the steps dazed from sound, colour and movement. 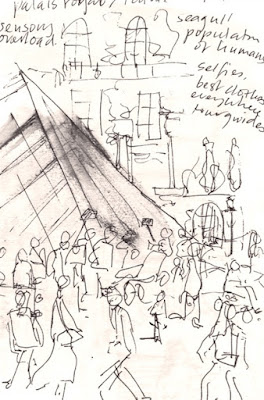 My purchase of the trip was a small silk scarve in a frip shop (second hand clothing), if the budget had been somewhat more elastic I could have bought a resin, two foot high, leopard skin-painted Micky Mouse statue which graced a podium in Samaratime, a department store which makes Gallery Lafayette seem tawdry in comparison. The small golden price tag next to the mouse stated, 3,600 euros. We gawped. For about five minutes. All my stored up, what is the world coming to sauntered forth, more so as I noted other similarly useless objects: Mickey's partner mouse for another 3,600; why not have the pair? a crystal pot with golden teddy bear head lid for a cool 1,000; champagne approved by Lady Gaga for 650 a bottle; a diamond encrusted stuffed anteater attired in pink flares - I jest, but there could have been one, possibly was if we had looked around a little longer but fifteen minutes was ample. 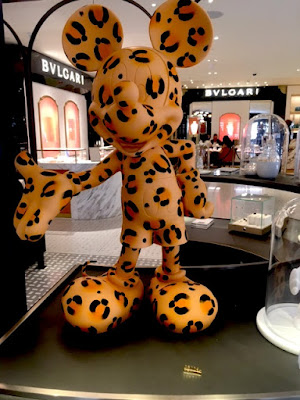 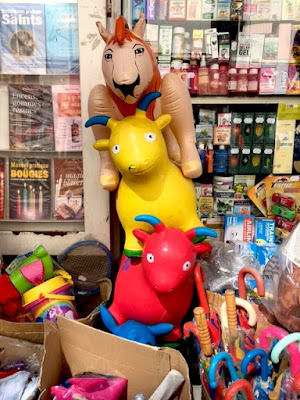 or, 7,50 euros (each!) on Belleville Avenue
Lifelong London obsessive, I found, sadly, on my last visit that a lot of strange and quirky little streets and shops seemed to have been transformed into dull places of chain shops/coffee hangouts. Paris appears to have retained more individuality, maybe due to less overseas property investment . . . I'm in no way any sort of economist but eleven years or whatever it is, centuries perhaps? (feels like it), of Tory so-called government haven't helped the cultural landscape of London.
The choice of non-chain cafés in Paris is boggling, most of them complete with their white-aproned waiters, little round metal tables and the ubiquitous rattan or faux-rattan chairs. We chose one after a long, hot walk around one of the Eastern arrondissements, and I allowed myself an evil Coke. This happens probably twice or three times a year. It has to be in an interesting eatery with a good sketch-able view and the bottle has to be very cold. That first gulp . . . worth waiting for. 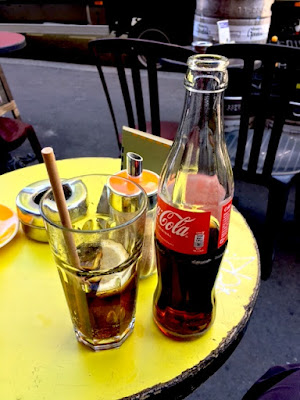 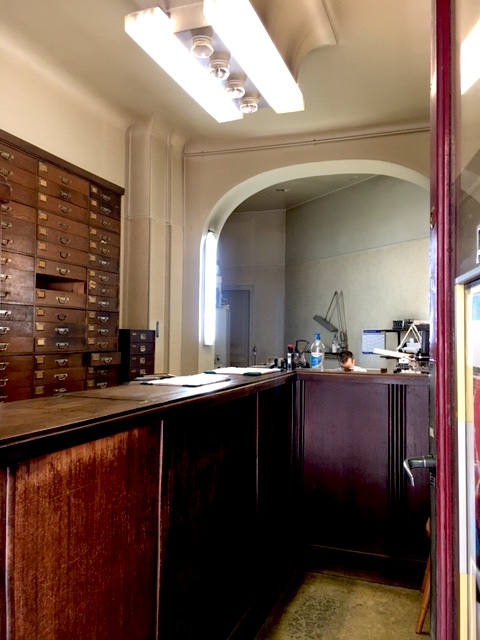 Certainly not a chain shop. No window display, no indication of what was being made or repaired but the owner or assistant was intently busy making or repairing something 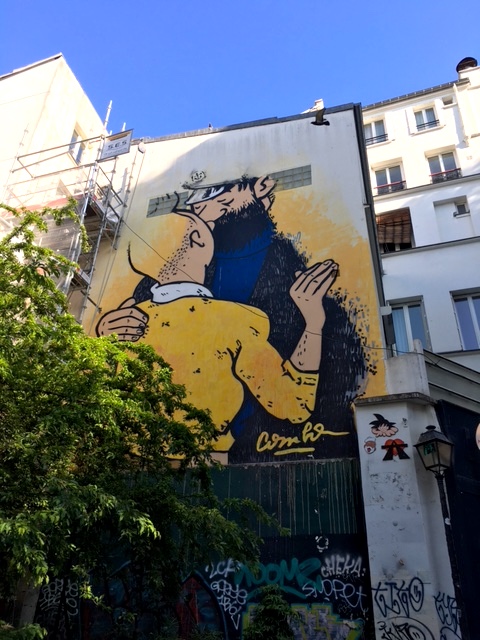 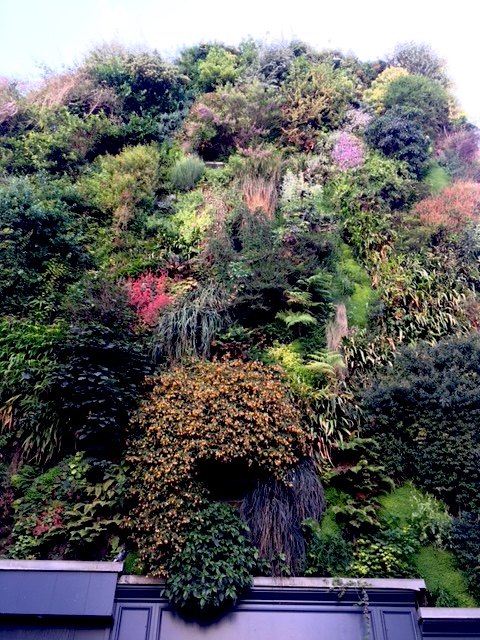 ...and a fine mur vegetal created by Patrick Blanc in 2013. Growing strong and housing many birds and insects Second arrondissement
Just as the buildings and streets of Paris are photogenic, so are its inhabitants. My small camera is currently broken I made do with the phone but somehow asking people if I can take their picture on my phone seems weirder than with a camera so I took a few surreptitious snaps instead. Next time I will be properly equipped as there were so many opportunities missed 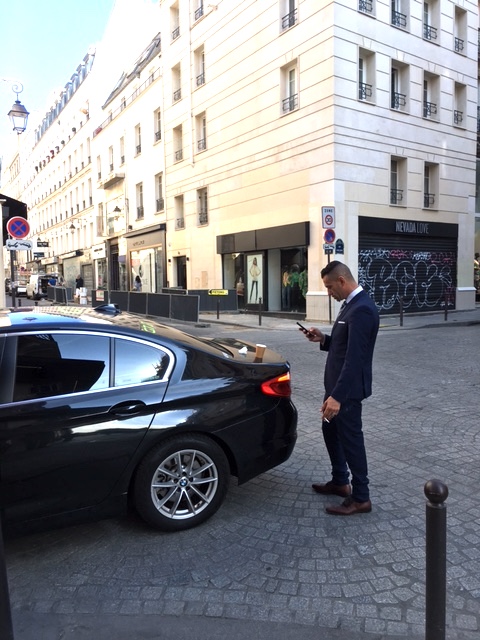 Unbelievably cool taxi driver with coffee cup balanced on his BMW
The last afternoon concluded with cake and tea in the sort of salon du thé in which I felt I should apologise for my pavement-worn shoes (and self) but it was worth it for the strawberry millefeuille and tea served in  wonderfully heavy old silver hotel ware; and the evening, a coup - getting into the opera to see Strauss's Elektra on a 15 euro ticket which was transformed into a 150 euro place in the parterre by a benevolent usher. 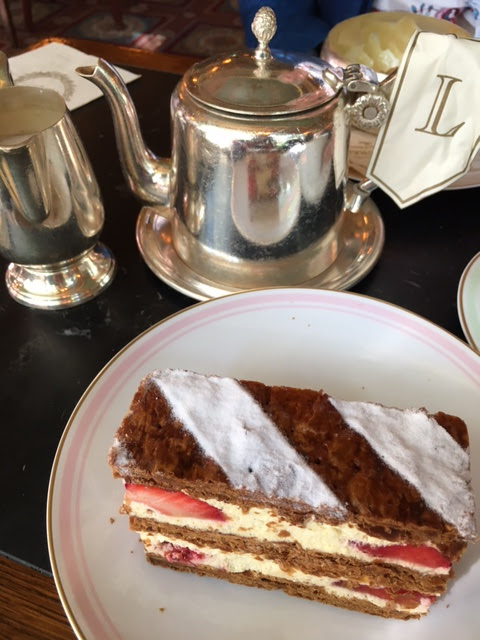 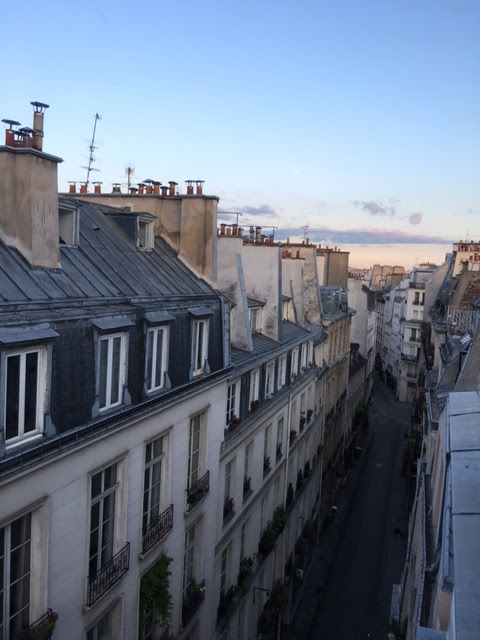 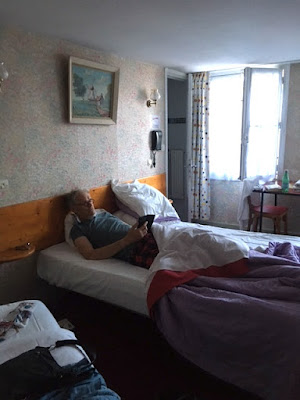 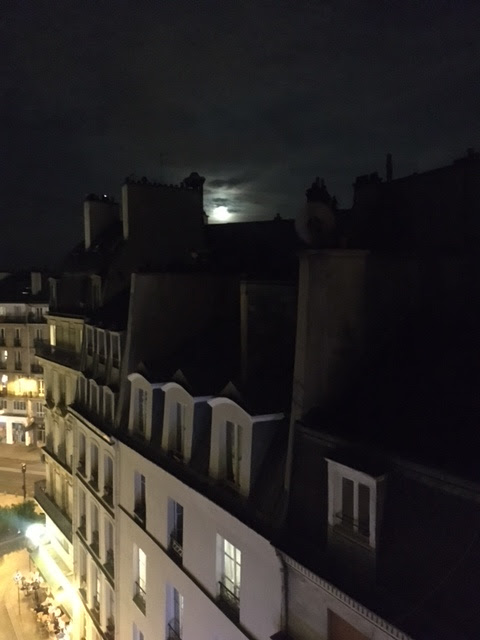 Posted by writing and other stuff at 06:50