Somewhere on this blog I started a loo diary - not about my doings as Lord Peter Wimsey would say - but about the decor of these strange little rooms where one is alone, cut off temporarily from the chatter and clatter of a restaurant, bus station, supermarket . . . Maybe I am alone in this contemplation, or not? Does anyone else sit there looking around them at the choice of tiles, hastily painted pipes and type of paper dispenser? Occasionally the loo will be a masterpiece, oneself honoured to spend a few minutes within a space of individual expression, its walls decorated with pictures, posters, mosaics, quirky murals, etc; more often they are are functional, in-and-out four tiled walls of varying cleanliness, the statutory brush in holder, small bin, roll of paper - if one is lucky.

Featured below is a bathroom worthy of a Lynch film I visited a few times while staying in an old farm house recently, the room taking up a long thin wedge of the house, loo at one end and basin at the other with a gap of about five meters between them. When sitting on the loo, the sink appeared to move slowly backwards in the gloom as in one of those dreams of never-ending corridors. A dim bulb lit up the turquoise and purple geometric 70s wallpaper, a small three-legged stool offered the roll of paper, and a snaking system of verdigris copper piping allowed musing on how the water system had ever been conceived. 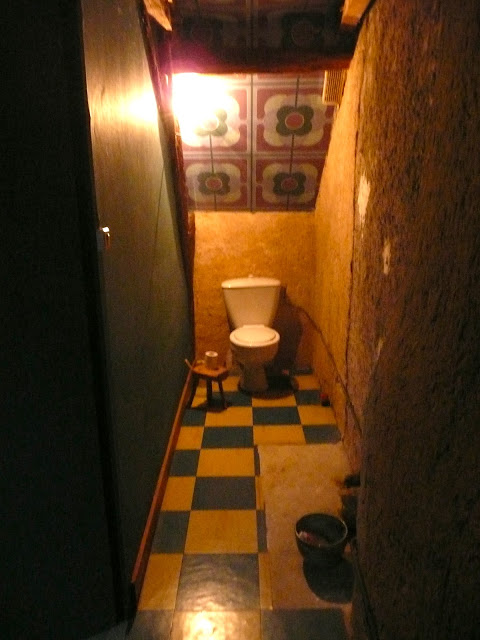 Posted by writing and other stuff at 22:05