Relevant to so many things at the moment - why are utter idiots in control of so much; why are humans pressing ahead with making new forms of robot hoovers, coffee makers and ever faster internet when there are clearly a few . . . slightly . . . more serious issues to be resolved.

This particular why? is about fly-tipping; why do people do it, why are they not bothered by the thought of turning a piece of unsuspecting landscape into a patch of man-made detritus that everyone else has to look at or move.

Recently along our local lanes someone has been repeatedly dumping car contents even though we have a municipal dump only a few miles away. Mark sent images to the marie and received not so much as Ah, yes, monsieur, eet is indeed, not good, until he sent another photo of a pile of beer bottles and suggested they might start a fire as the temperature was hovering around the late 30s. Everything disappeared the following morning . . .

Yesterday on a dog walk along a particularly lush (yes there is still lush amongst the parched landscape) lane. After a few minutes of admiring what nature can still push forth in late August if left alone to do so, we happened upon a cache of about seven bin and supermarket bags bulging with clothes, shoes and bags. Why? Why not take them to the clothes recycling bank which is about half a mile away rather than potentially wrecking the underside of their car on the tractor-wrecked path? Or drive it all to Emmaus in Saumur when they next have to go there. 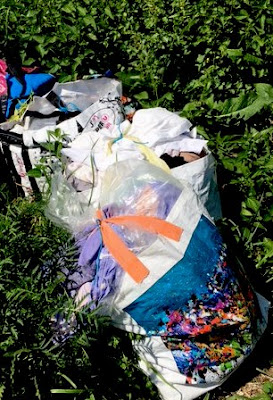 We returned later as we did have to go to town and went through it all, Ezra taking the less wearable stuff for his recycled clothes projects, and myself a few useful items. Then we did drive it to said emporium where hopefully they should raise a couple of hundred euros by our calculations. I wonder if the tippers ever muse on what happened to those bags, placed far enough away from a road that almost no-one would come across them. Presumably not. Clothes dumped, car reversed, hands wiped, job done. Weird. 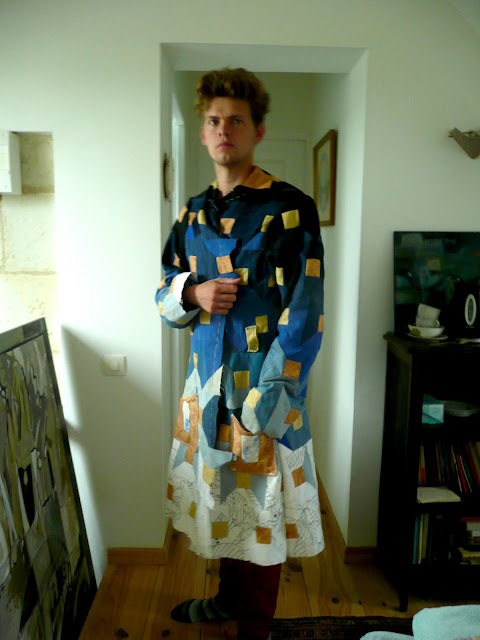 One of Ezra's work-in-progress coats, all made from recycled clothing 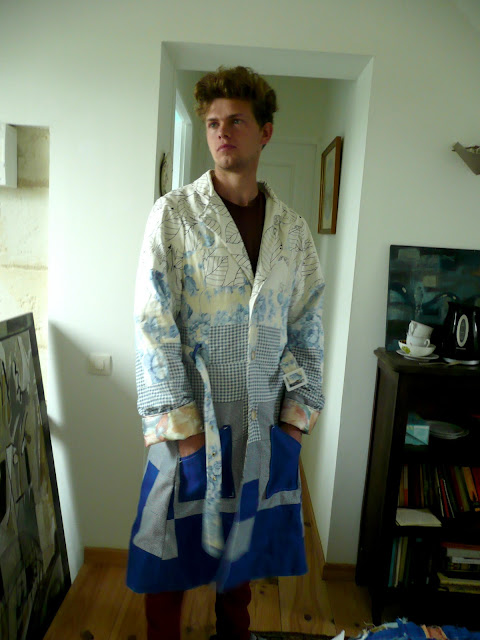 Posted by writing and other stuff at 23:58