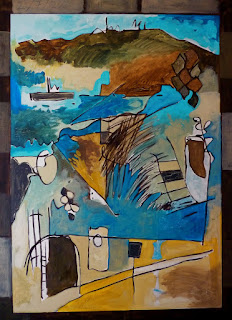 In the series, 'fenêtre du train' which I am told should be 'vitre' not fenêtre, now I have printed some cards of them — however I'm sure its very quaint.

My favorite mis-translation of French created by myself was years ago when I worked in a French restaurant in Farnham. The rotund clog-wearing French chef had an incredible temper. When he really worked himself up into a state - like the time I tipped over a vat of white chocolate and brandy sauce behind the two ton freezer - he would hop from one clogged foot to the other and shriek 'au bord de la mer'. Or at least that's what it sounded like to me at the time. I felt sorry for him, he obviously worked far too hard and needed a holiday at the seaside . . .

(bordel de merde = shitty whore house, or near enough).
Posted by writing and other stuff at 11:54