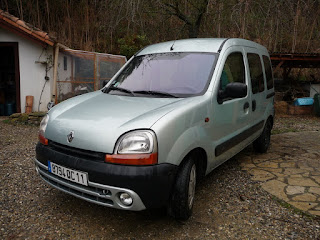 I woke up this morning.
This was true, which was already good; not everyone can say they woke up this morning, but I suppose if they couldn't say that they had woken up this morning, they would no longer be with us. Anyway, I did, and I felt a bit crap, partly due the January 'Jack The Ripper' weather, but partly as Mark is about to depart to the land of clogs and round cheeses for 2 weeks. What can we do when we feel like this?

For me, its commencement of small unimportant tedious jobs, which give a feeling of accomplishment (sad) then lead on to the bigger picture.
Todays prime example of tedious job was washing the car. This is our noble old Kangoo: filthy, stinky and beaten on all sides including the roof, where I backed into an overhanging sign which said: do not reverse here, in a car park. The cat has started a new hobby of getting in the car, getting trapped and peeing on the seats . . . nice! So the overall feeling of getting in the car recently has been . . . depressing.
An hour later we had a beautiful shining thing sitting on the drive: amazing! A sponge, two buckets of water lightly anointed with floor cleaner, quick hoover round, and my mood changed to positive — was even able to go to the bank and make a R.D.V that I had been putting off.
Mood changes are a strange thing. Must read up on what the function of feeling crap actually is, there must be a reason for it. Perhaps some people never do feel down, but then you wouldn't really appreciate when you were feeling very 'up'. Think I must stop here, and make a cup of tea, or take the dogs out.
Posted by writing and other stuff at 04:30