Is this not the most poetic road sign you have ever seen?

Would there be an English equivalent? I can't think of any. Most seem to be straight forward 'don't do that' sort of messages. 'Chickens nests in formation,' beautiful . . . Someone somewhere in an office, or possibly several people must have thought long and hard about potholes.
"Wat should zees zings be labeled? Dents in ze road? undue undulations? bidets?"
"I 'ave a suggestion, monsieur le director — chicken nests, you know, ze gently sloped sides formed by a chicken's scratching feet, while uttering ze bruauack bruauak noises."
"Of course, but you are right Mr Dupont — an excellent end to zis meeting. Now, let us go and 'ave a two hour lunch break involving some Coq au Vin".
Limoux is full of these holes after the recent extreme cold, although most of them resemble meteorite craters. Maybe one year the mayor will decide to spend the 40,000 euros spent (allegedly) on hanging baskets on re-surfacing the roads in the city of Blanquette. However I think they are quite good as natural speed decliners, sort of speed bumps in reverse. 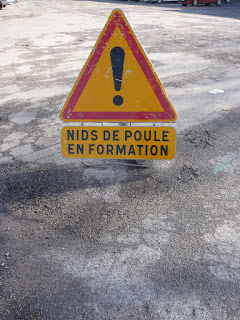 Posted by writing and other stuff at 11:34