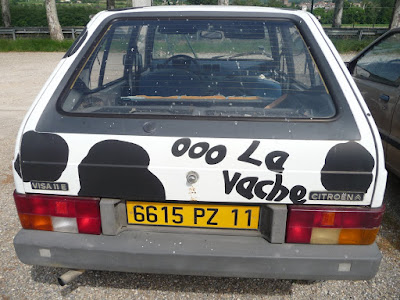 I was hoping to load up a little film of the Visa's last dreamy perambulation to the casse auto, or rather, sweat-inducing nightmare crawl with line of 'faché' drivers as car was only moving at about 10 KM per hour but blogger told me it was a bad film? Okay, was not a masterpiece worthy of Cannes, but neither did it contain violence, swearing or dodgy people in tight leather outfits
Shame, as I wanted to broadcast all the little squeaks and grinding noises which had become so familiar to me. Oh well . . . here is a picture of the vache's rump instead. Anyway, sob, she is no longer with us and I will be looking out - in a relaxed fashion as we will try and make do with one car - for another old character motor to take us to the dump, etc.
So, if anyone has an old Renault 4/5 Citroen Ami/ Ford Capri/anything else interesting, let me know.
On a serious note, I went and bought a bike helmet this morning as I intend to get out more on my wonderful shell-suit coloured vide.Grenier  bike. This was prompted by an awful piece of news from my godmother. One of her friends died from a head wound after falling off her bike while just 'nipping to the shops' makes one think . . .
Posted by writing and other stuff at 01:57

Email ThisBlogThis!Share to TwitterShare to FacebookShare to Pinterest
Labels: car scrapping in the Aude.