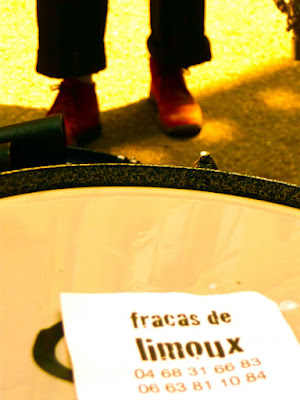 We played Limoux for the Fete de la musique last Tuesday - Le Fracas (our samba band, that is). Fantastic. Played between 12.00pm and 2.00pm in Rue de Augustins for the benefit of two shop owners and a dog. Somebody was jiggling about in an upstairs window, but they might have just been telling us to bugger off as it was siesta time.
Limoux never seems to quite get it together for this countrywide festival; the shop owners were trying their best to get things moving with people dotted around strumming guitars, but I got the feeling there would have been more interest if it had been some sort of eating festival. I could be wrong as we had to leave soon after; maybe it was pretty damned hot later . . . I think not however as a near-tropical rain torrent announced its presence in the early evening.
Better luck next year.
Posted by writing and other stuff at 05:55