Somewhere in the suburbs of Toulouse . . . 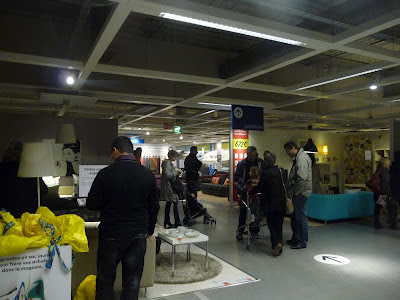 Ha, serves me right for being rude about Ikea. I went there, as I was collecting a friend from Blagnac with the intention of buying a small amount of bedlinen, a couple of towels and a frying pan. Arrived well in advance of opening time and joined crowd of other sad folks panting with anticipation at the red barrier rope thing to keep us out until the declared hour. See pic. The barrier was lifted and we all zipped through the maze upstairs, didn't have a coffee as the place was under reconstruction, and ended up in the 'market place bit downstairs. Got a trolly as I could feel that odd excitement enveloping me, the urge to buy non-needed plastic items. Oo look washing up brushes at one euro each, lets get ten. There was an air of sheep-like bewilderment, people pushing trolleys up and down, trying to find stuff to buy. Ikea was having a major re-fit, but had failed to tell anyone on the way in. Or perhaps it was all an evil plan to make one think about re-designing one's kitchen in the wake of non-purchasing disappointment. Bastards. Anyway I left without so much as a flannel. 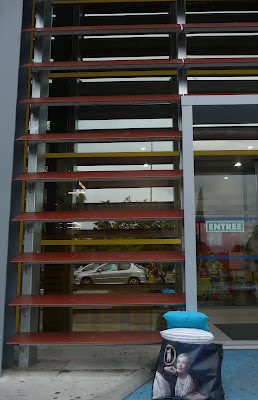 However . . .I did discover 'Babou' next door. Terrible emporium stuffed with more rubbish than Amazon's returns department. For the price of one poshish duvet cover I got: three cushions, four pillow cases, four towels, three (rather nice) mugs, four plates, socks for Ezra, a bath mat, a huge bag with a picture of one of the Queens bingo friends on it, I love this! (see pic)and nearly a pair of sequined Union Jack shorts, (thank God not.) I dread to think of the environmental impact of such a shop on all levels, but is the cuboid blue and yellow shopping cathedral really any better. . .
Posted by writing and other stuff at 06:28

Email ThisBlogThis!Share to TwitterShare to FacebookShare to Pinterest
Labels: Ikea vs Babou