Get your lighters out!!!
We had to go and see if it really was Lee "Scratch" Perry performing in little old our-ville. It was! Here he is at some ancient age, late 70's I think, dressed in an amazing ensemble of glittery boxer shorts, track suit, military jacket and baseball cap with added . . . everything really.
He seriously pissed his band off by strutting about and telling them what to do. Well, I believe he is also called the upsetter. Fantastic if you can still cause people to jump to attention, even if reluctantly, at that age.
The other group pictured here - Louis Bertignac on tour, ex guitarist of the 70s French rockers:  Téléphone. He certainly knew his guitar stuff, even if not quite my cup of tea. Glad I had my earplugs. Pretty impressive light show, eh? It was actually difficult to remember we were seated on the main drag outside the lycée in Limoux, and not in some mega arena somewhere. 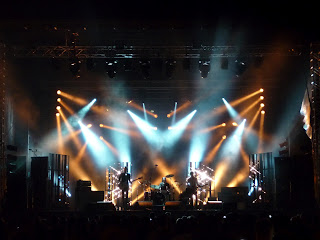 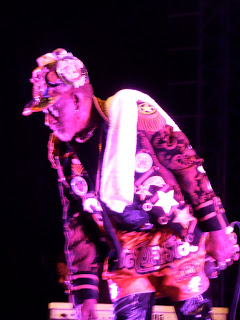 The same spot is now being taken up with the annual fairground twaddle for the next week.
So glad Ezra has moved on from wanting to throw his money into the 'cakewalk' machines and then getting upset because he hasn't won a laser pen which will last for exactly four minutes before becoming landfill.
Posted by writing and other stuff at 01:46