The Paris guide book assured us that there is an awful lot of this to be done in Paris.
Seized with an urge to buy a pair of pants we went into the mother of all shops: Galeries lafayette.
I immediately experienced a sort of consumerism overload meltdown just from being on the ground floor where packs of women in thick foundation were waiting to spritz us with the latest celebrity endorsed smells.

The noise is intense: the sound of plastic being swiped, the yager yager of a thousand voices discussing mascara, and the clack of stilettos. I looked at a bag out of idle interest: a mere 3,000 euros, and that, an economy model.
Mark was beginning to glaze over; time was in short supply, I found the escalator - third floor: pants. Well, it didn't say that exactly. 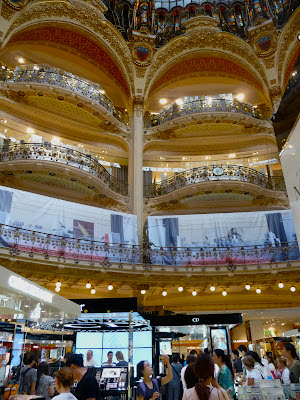 This is the biggest lingerie department in the world according to our book.
It was in fact a minor planet, inhabited by sylph-like creatures with doe eyes and black pony tails. I cruised the isles looking for ordinaryish pants while Mark studied some silky scaffolding. Eventually I found a black pair, Emporio Armarni nonetheless but with a price tag within the realms of sanity. They were packaged in a little gold gauze bag, my money removed from me by a catwalk model man, and we left the building after admiring the cathedral-like structure of this monument to shopping.
As a contrast we then went to a flea market in a cartier of Paris at the end of a metro line. A windswept corner of the city: gritty and full of sixties buildings of non-interest. The shopping was a little different . . . pants - three for a euro; five Eiffel towers for the price of four, and more dodgy watches than you could shake a gendarme at. No tourists with cameras here. 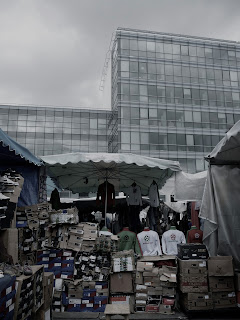 An interesting day of extreme contrasts in pant purchases and architecture.

Posted by writing and other stuff at 05:30