I've been researching greyhound-type dogs over the past few months since dear old Una passed on. Second hand whippets and Italian greyhounds don't seem to be available in France, and adopting in the UK to bring back didn't seem to be an option either.
The answer, if you want a greyhound-model type dog here, is the Spanish variety: the Galgos, or Galgas if female.
As runty dog is king ( if only a pathetically small one) of the house, it had to be a woman dog. I contacted a 'Galgos rescue' association place and went though the very stringent adoption process. A lady came all the way from Toulouse to check our garden's fences, accompanied by two Galgos so we could have a look at the scale of dog we were contemplating. After some fence work (thanks, Ed) we were deemed to be satisfactory and Christine started to match us with a dog.
Yesterday, Ezra and I went to meet the new family member.
She arrived in a truck along with about twenty other rescue dogs from somewhere in central Spain: a long journey from which all the dogs looked remarkably relaxed. A credit to the drivers love and care (she had driven the Luton truck to Spain and back in two days). 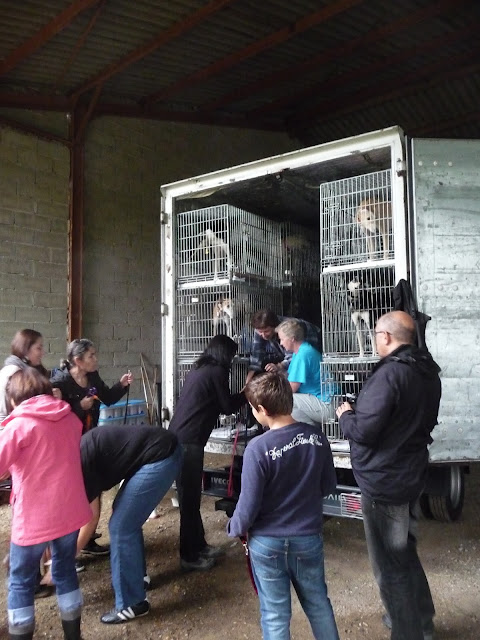 The crowd of waiting adopters moved forward keenly with cameras to catch the first glimpse of their chosen dog - Melia (now Gala) second cage down on the left.
Each dog was lifted carefully down and the name called. It's an odd thing to be introduced to a prospective pet in this way; normally we would have visited a house, or a dogs' home, browsed, met, gone through the shall we - shan't we, thing. Homing through an internet picture or youtube film is something else. However, Christine had done her job perfectly: Gala is perfect. Docile, cat-ignoring, keen to walk and very beautiful; we couldn't have found better. I'm sure Una would have agreed.
On arrival, chez nous, the cat bristled briefly then asked for food, and Runty dog showed his terrible fangs and growled a lot. A day on, he seems to have forgotten that he was ever alone and walks (hops) happily alongside her.
Today is a day of adjustment: how many walks? What does that squeaky noise mean? - not a bark yet,  is she happy? Does she miss the other dogs in the refuge?
All will be revealed, but at the moment she looks very contented lying on the old tiger rug outside, listening to all the new sounds in this different land.
I try not to look up too much information on these magnificent, gentle dogs as there are images on the net that haunt the mind. I saw a photo once of what a mindless hunter had done when he deemed the dog to be no use to him anymore. I hope something worse might befall him.

If anyone would like to adopt a dog - here is a link: http://www.galgosfrance.net 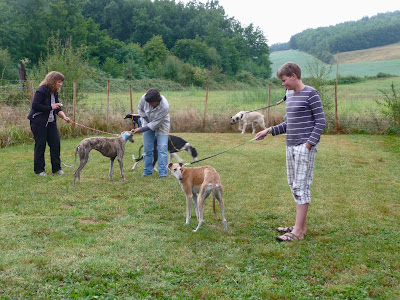 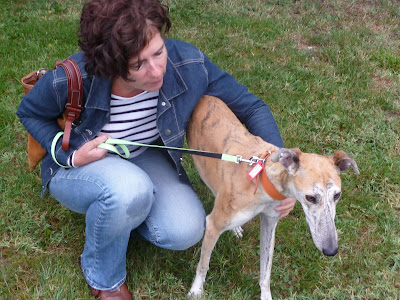 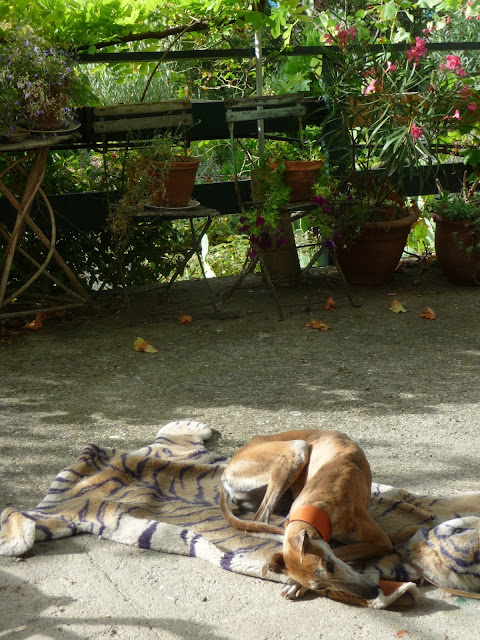 Posted by writing and other stuff at 01:00