Ah, back again.
Just been to the UK for my regular Mum visit - or, my other life. After a few hours re-adjustment, I was back into the over there routines: seeing Mum, sewing on clothes labels, working out why her TV had a blank blue screen, seeing family and walking around the Dorset lanes - dog-less.

I've been passing a riding stables there for three years now; each time I pass, I think, 'I'd really like to do that.' This time I did: mainly as I'm writing a story about a woman who lives in a church with a horse and I felt the need to at least sit on a horse in order to feel qualified to write about it - the horse bit anyway.
I did 'go riding' a couple of times when I was about seven; I can't remember anything about it other than the horse wedging itself between a gate and a hedge and me not being able to work out where reverse was.

So, I found some vaguely appropriate boots in Oxfam and turned up at the appointed hour. Molly the horse was gentle and greying around the ears, and I was assured she wouldn't throw me off.
It was great! I don't suppose I'll ever get to jumping over a stripy pole or galloping around a meadow in the manner of a Jane Austen character, but I'm happy to say that I can trot (or the horse can at least, with me on it) stop, start, turn and not fall off. I have also discovered some new muscles which we humans are obviously supposed to use, and perhaps need at some point in the future when we stop washing the car on Sunday and wash down the horse instead.
The next day, when I wheeled Mum down the road to look at the fields we were lucky enough to meet a 'mobile farrier'. I thought horses had to be taken to a blacksmiths for new shoes, but apparently not.
He had his van, a little fire-box, tools, portable anvil - the lot. He had been a farrier for more than forty years. The speed at which he worked was impressive, grabbing the horse's foot, yanking off the old shoe, cutting away dead hoof while he talked to me, his mouth full of nails.
The shoes last for about six weeks on grass, add this cost to the vet bills, the hay in winter, the rental of a field etc, etc . . . my daft day-dream of adding a horse to our menagerie faded as quickly as steam from a pile of fresh horse dung. 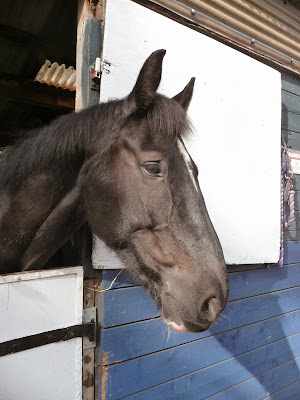 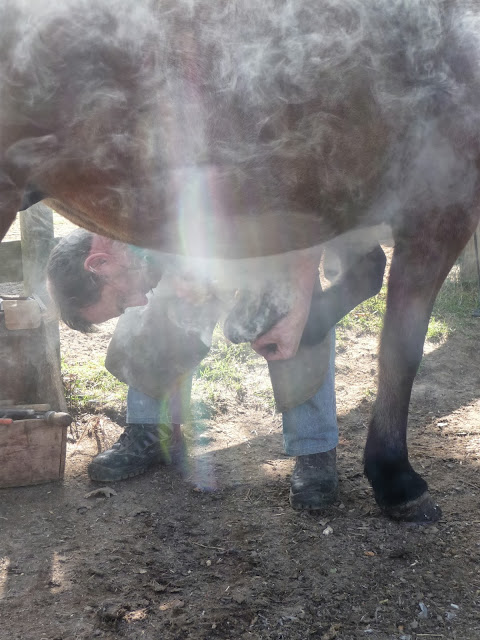 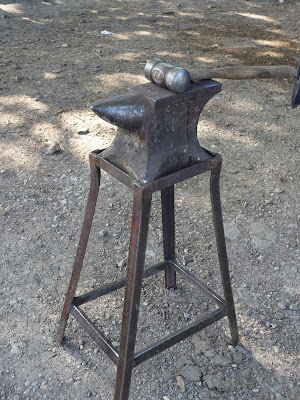 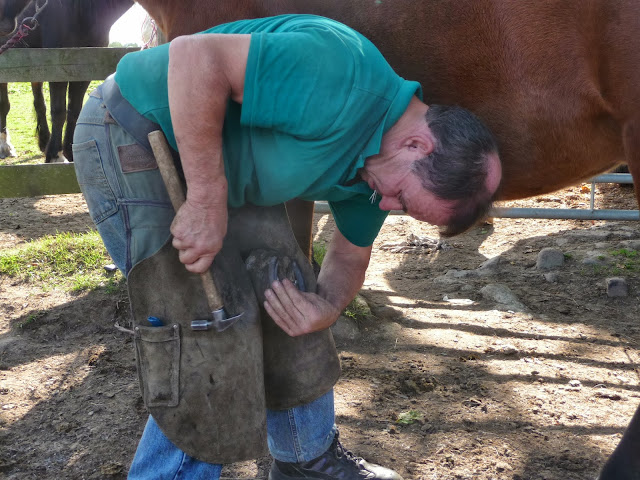 Might see if I can rent one though.
Posted by writing and other stuff at 04:54