About ten years ago we bought a piece of land about three miles from us as we had no garden in our town house. We used it a great deal: struggled with oak tree roots, planted olives, made crap irrigation systems and generally enjoyed it - until we moved to another house with a huge garden.
I haven't been to the land for ages and feared a sad sight of withered trees and overgrown-ness generally. Actually, it was okay, more than; most of the trees have survived and didn't look at me too accusingly.
The cherries are now taller than Mark, the olives, small but certainly not dead. Some pin d'Aleps, that I had put in thinking I would transfer them to a useful hedging spot are now vast and happy, sitting at the edge of the field like a row of chunky football substitutes. Don't think I'll bother trying to move them - why I didn't plant them as a hedge at the time, I don't know . . .
I took the dogs for a walk down to the river and passed the land of 'Mr Combe' on the way. It looked strangely vacant, weeds sprouting and no sign of veg. Oh dear, I think he might have passed on to the great greenhouse in the sky - he was VERY old ten years ago.
He used to come up the hill and stand like Columbo investigating a case of particularly runty vegetables - ours. He would squint, suck on his fag and tell us what we should be doing, and, he was probably right.
His tomatoes were always the size of a large gerbil, ours - more shrew-like, but they tasted good. His soil was better, and it was, being near the river; his methods, his tractor (I did point out we didn't have one) his shed, his irrigation system, etc. I did ask him if he could play the piano as well as Mark but he didn't answer.
But, I did like him and his theories, and his super-veg. I salut you Mr Combe if you are no longer with us.
Here is a pic of his dog's house, the hand painted sign that used to say 'danger' now long gone. 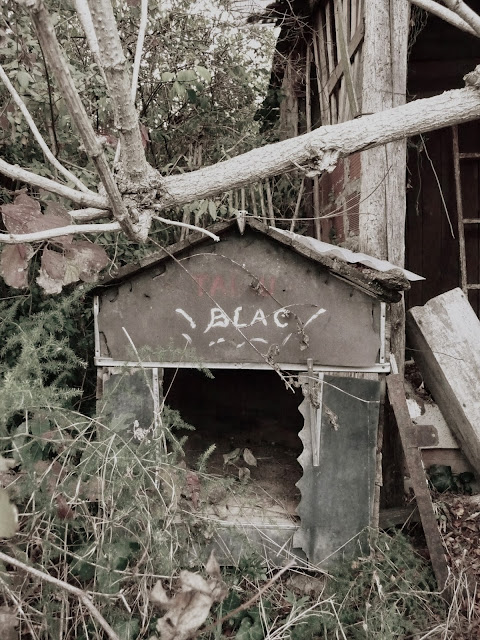 Posted by writing and other stuff at 09:28