In 2010 I had an episode of extreme pain and fear that went on for what seemed like months, maybe it was only weeks, but it felt an awful lot longer.
(Blog post 'evolution' in 2010, if anyone is interested . . .)
Not wishing to recall all that, but I had a reminder of it this morning, as if myself had prodded myself and said 'hey, stop, otherwise  . . . remember this!'
After the afore-mentioned phase, I had worked out pretty much what caused the pain in my face and neck and had avoided, as much as possible, doing the things that set it off. But we get complacent, do we not?
In my case it was: don't over do it on the computer (this will be a short post) don't use the phone much, and absolutely no stuffing it into my neck and talking with head at a stupid angle while cooking/washing up/ feeding the cat, etc. NO coffee - actually I have stuck to that one, but the tea amounts and strength has been creeping up; don't slump while reading or TV watching; alternate sitting activities with walking, gardening etc; and the big one: Don't get stressed.
Easy to say: we all do and about the most pathetic things sometimes. But I do think the cumalative stress thing is damaging; adding on more and more to the list and feeling guilty if not everything is dealt with.
So today, I have done most of the jobs, cast an eye over the list, ignored some things and spent a bit more time just . . . existing; a bit more time looking at trees, clouds and appreciating the day for what it is. It may not last, and I might get another warning in which case I will slow down again and thank myself for reminding myself that it's just not worth getting that stressed; a bit is good - keeps things moving along, but just not - too - much. 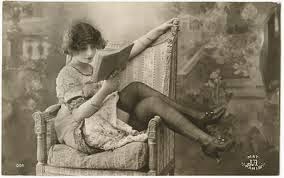 Image borrowed from 'Sweetoldvintage blogspot
Posted by writing and other stuff at 08:26