When I did A level geography, the subject I found particularly fascinating was the development of town/village names from the population of people that had gathered there and why they had - rivers, good grazing, Ikea, and so on, and how personal names had developed from the association with place/trade, etc.
Unfortunately, a large part of the rest of the course zoomed over my head (stream sections and other mathematical stuff) and I did subsequently only just scape through with an E. but, usefully, I was left with afore-mentioned curiosity into place/people's names, and an urge to visit, and ponder on, how and why towns appeared where they did.
This morning I found a very useful site which listed just about every surname one could imagine, (I was re-naming someone in my current book). A lot of names, as I imagined, were associated with hollows/copse/woods/bridges/hills - person who lived in or near one.
I liked this one:
Acker - person who lived near a field. Surely it would have difficult not to live near a field in 1783 or whenever. Why wasn't everyone called Acker, except those who lived perhaps near water - Attwater, or Attaway - someone who lived close to the road.
My favourite name must have been, Bagley: someone who lived in a field, populated by badgers (old English - bagga 'bag-shaped animal') combined with leah (woodland clearing).
I have lost touch with my friend from school called Gill Bagley. I wonder if she was aware that her forebears lived with bag-shaped animals in a clearing. 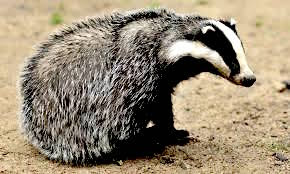 
A few other whizzo examples:

Barrett: derived from middle English, meaning dispute, originally given to a quarrelsome person.

Bush: given to a person who lived in or next to bushes.

Courtney: A person with a short nose (from old French - court nes)

Garnett - occupational name given to person who made hinges, or sold pomegranates. Seeds like garnets, I suppose - rather beautiful.

Hardy (yey - me) from old French meaning, bold, daring - should have seen me on the garage roof this morning unblocking the gutters!)

Hopper - referred to someone who hopped . . . mmm?

Kellog: from the middle ages - butcher - 'killer of hogs' not squasher of corn into crispy flakes, then.

Mutton: shepherd, or someone who in some way resembled a sheep. 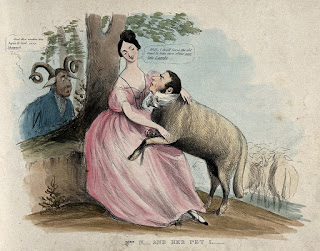 Posted by writing and other stuff at 04:58