How wonderful that nature has decided to bring forth oranges in the crappiest, coldest part of the year.
Compared to the long-travelled out of season specimens found in the supermarkets during the rest of the year, the 'down the road' ones from Spain are an explosion of taste and colour at this time.
For a couple of weeks in January, a local grocer in our town stocks Seville marmalade fruits, and since we never seem to make the pilgrimage into Southern Spain to collect a car load (one year . . .) a walk into town with a carrier bag has to suffice. 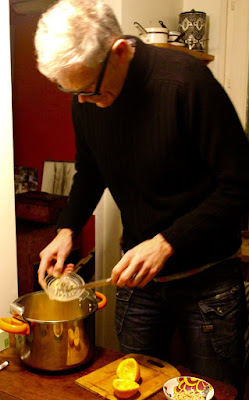 This year's batch, made by Mark, is without question, the best ever - tangy, and with well-cooked small shreds of rind.
His method, for any jam fans out there:

Cut the oranges (around a kilo) in half and squeeze the juice, keep all the pips in a separate bowl. Cut the halves in half and then slice finely adding them to the juice. Add water and cook gently for an hour or so. Do the same with all the pips in a separate pan. Add sugar - bag and a half - to the oranges and boil until setting point is reached - about half an hour. Add the pectin-y liquid from the other pan at some point during this process. Let it rest in the pan awhile then ladle into clean jam jars and seal when cool. 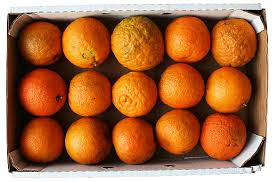 Posted by writing and other stuff at 21:46