It could be the next planet ready to be covered in a layer of plastic once we've done with this one . . .

Making my way back home, I stopped in Liverpool Street station to buy a bottle of water, having forgotten my own one to refill (tut-tut). Of course, if you listen to all the stuff telling you that you should be drinking your own body weight (actually, possibly a litre, I forget) in pure, clear, fresh water each day, by the time you have spent three hours on a train and have only consumed a creosote-like paper cup of tea, the alarm bells start ringing . . . quick find water.
Delice de France, Pret a manger, etc, only had large bottles and I just wanted a glug as I wished to avoid fighting my way past the aircraft drinks trolley to the loo. Boots had bottles of all sizes including this tiny one (below) containing water from a famous source situated in a French mountain range. Why is this? - I mean, why am I buying water from under a hill in central France when Buxton or Malvern are considerably nearer, and actually all I wanted was a slurp of tap water - something we are lucky enough to have! 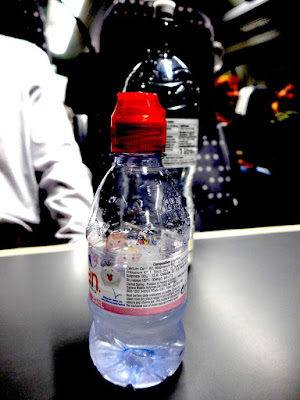 This bottle holds 33cl. Including its very thick 'danger, do not drink' style flip-cap I would think it is constructed of enough plastic to make about, I don't know, twenty syringes? or a vital part of a solar panel? - anyway, something else plastic is actually vital for.
I'm looking around at this one train carriage. The guy opposite me has a bottle - bigger and from some unsuspecting mountain in Scotland (better); the woman next to him is sipping every now and again from a green bottle - that one from Italy with a beautiful name - in fact that's a statement in itself, I suppose: my choice of water.
So . . . why can't we have THIS (bearing in mind I know nothing of economics, market strategies or how this might be realised) - Water fountains - just tap water, like in the olden days before water became fashionable.
And if you need to buy mineral water, commercial fountains, along the lines of those giant upside down office bottles. The companies providing the fountains and Boots or whoever could still rake in their profits, we could have paper cups and then throw them into recycling bins. Fifty pence for a small cup? True we wouldn't have that 'mouth-to-breast' sort of continual comfort sipping but I think we could all cope.
I read the other day the US alone gets through something like 50 million plastic water bottles every day - gets through - and NOT recycled.
So, why can't we stop this? Too much money to be made from H2O; too much mania about 'fresh' pure and straight from the source; too much advertising revenue and not enough willpower or foresight from governments, I imagine.
No more plastic bottles except where really needed - a relatively small thing to implement, compared to mass invasion of another country or space exploration?
Posted by writing and other stuff at 03:52