a nice cup of tea

Funny how drinks can taste so different according to where you are and what you are drinking them out of.
The cup of tea below was partaken of in a small roadside bar about half an hour from home after an incredibly long journey on many small back roads.
It was only Yellow Label - the tea you dig out when all other tea possibilities have been exhausted, BUT, after a six hour drive, and drunk out of a wonderfully chunky hotel-ware cup, with lorries zipping past it was pure heaven.
I would have done the boring motorway route from Bordeaux after re-installing the lad (see last post) back into his art school life and flat, but as part of the back bumper seemed to be flapping off the car, and, being a story-inventing type person, I could see the thing finally detaching itself to crunch into someone's windscreen - not good. So, after a brief look at a massive scale map, and as usual, not gauging distances, I set off across country and got lost, and re-realised how long driving on small roads does take, especially as French road speeds how now been dropped to 80 from 90 kms per hour.

Still, I saw many wonderful things such as a newly planted forest, unsung and beautiful village churches, llamas, donkeys, distant vistas of the pyrenees, a man walking a pig on a lead, Toulouse-brick pigeon houses, newly ploughed undulating fields, wind-ruffled lakes, and all the different architecture of each region I passed through, rather than three lanes of traffic and the occasional road bridge.
Also, I avoided all dismal motorway service places and stopped in a small grey stone town called Lectore I had visited on the lad-dropping off trip last year. It seemed the same, and I did pretty much the same thing - had a drink and wrote him a letter - something we forget to do back at home when normal life encroaches.
So, despite a sore-ish back, I'm glad I took the longer, slower route. It gave me time to reflect on the happy summer time we spent with the lad, our respective projects to be started in this new phase of the year, appreciation of the landscape I was passing though, and the realisation of just how good a cup of tea really can taste. 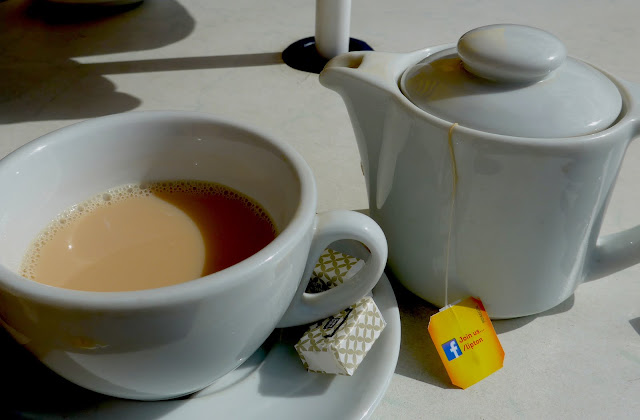 Posted by writing and other stuff at 11:03