As an antidote all the crushingly depressing news surrounding us on all media, I opted for re-exploring the subject of Permaculture; something I find fascinating and hope-inspiring.
A few Youtube videos later I felt encouraged to attack our summer parched garden. I'd already made heaps of cuttings from various attempts at an autumn cut-back and had been considering where to have a large bonfire without setting fire to any trees.

Supposing I didn't do a bonfire, let alone several? Or drive a car load of green stuff to the tip.

After watching one truly amazing gardener dumping all his green vegetation along with cardboard, paper, kitchen waste, pine needles, etc etc, I emulated this - not very correctly - but with what I had.
The idea is to not disturb the soil by much digging and turning but to add moisture and rotted down plant material so that you actually leave new soil to develop as the debris gradually breaks down.

The more serious Permaculturists - if that is a word - do a lot more preparation than I did; one guy driving to his local forest, felling semi-rotten trees, hauling them back and burying them in trenches and then covering it all with grass cuttings, leaves, compost, etc, etc.

In a piece he had prepared earlier (hello, Blue Peter) he planted young lettuce plants within the foliage mulch and you could practically see them starting to grow enthusiastically. His garden was a truly beautiful tapestry of plants, vegetables and fruit trees. Ours is a windswept, ragged thing with some nice bits I've managed to keep watered enough over the very long, hot dry summer. It'll be an interesting experiment to see if my mulching attempts bear fruit, or at least potatoes bigger than marbles.

Another film I saw was called Greening the Desert. Geoff Lawton 's extraordinary project has taken some of the driest desert spots in the world and has turned them into living, green spaces. The before and afters are incredible: literally sandblasted areas of rock made into functioning food-producing gardens. So, if it can be done on an inland desert I should be able to improve our Southern France patch of land. 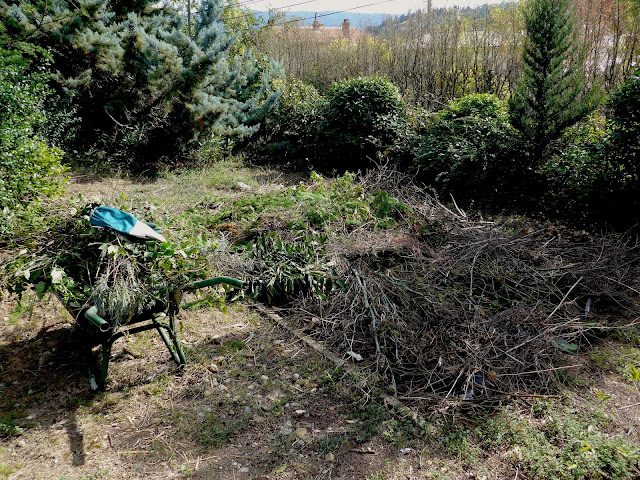 Posted by writing and other stuff at 06:20