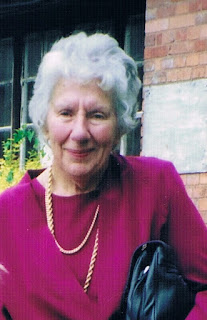 I had, like most people, been dreading the funeral.
Everything had been prepared - plot chosen, flowers ordered, words written, music decided on, catering arranged (thank you Ysanne and Greta), people invited . . . but the actual reality of seeing the person in a coffin, or rather just the coffin and imagining the person - Mother - inside, is a very different thing to all the more straight forward and mostly unemotional organisational stuff.
The day arrived, bright and sunny, and from the moment I stepped onto the gravel drive of the woodland burial ground I knew it was going to be a joyous occasion - of course tinged with much sadness, but it was impossible to feel really gloomy surrounded by so much springtime beauty.
At this particular burial ground the service was conducted in a little thatched barn - led by (thankfully, the funeral director had suggested using 'a professional' to 'glue it all together') Rob, a particularly eloquent, thoughtful and humorous celebrant - and included part of Mum's choir singing Mozart, Mark playing Ravel, Delius and his own piece dedicated to her - The Periwinkle Waltz; my poem, and words from old friends.
After the service, we walked up to the grave - a plot I had chosen as it had views of distant hills and magnificent oak trees - Rob spoke, birds sang and it was all just perfect.
Oddly, I didn't sob - I normally howl at all funerals, even at people's I hardly know. It just all seemed rather remote to me. I think probably as I'd sort of said my goodbyes after her first stroke and she became a different person; then followed all the years as she went slowly downhill which was fairly distressing. The last few weeks - see a few posts back - were utterly awful as she struggled on in hospital. Maybe that's why it was a relief to know she was finally resting in a beautiful wild-flowered place that I would visit with many happy memories of her from earlier years.

Up on Win Green Hill. A poem for Mum.

I wonder if within time’s fabric, certain memories still exist
Not just in my mind but in a sort of actual time
Do we still walk up on Win Green Hill?
Where larks dive in a never-ending sky?
Or swim in Hampstead’s placid ponds
And clamber over rocks in Kimmeridge Bay,
And after, drink tea in the ex-post-office café?
Do we brush through the ferns in Epping Forest?
Smell the summer roses in Regents Park
And observe the waves from the Isle of Sark?
Watch Star Trek in black and white
Listen to our three records at Seymour Court
Pick raspberries at Greenhill Close
And stroke the nose of the neighbour’s horse
I think we do
The nocturnal house at London Zoo
The dark and mossy Highgate Woods
Its oak trees’ first springtime buds
The sand and sea at Canford Cliffs
Salty skin and tired limbs
The pause halfway up to observe
A brave scabious nodding flower
A darting lizard
Old Harry Rocks
The Isle of Wight
The opal sea.
These treasured living memories.

Posted by writing and other stuff at 07:31