The view from the hill, a 70s childhood. School route perambulations.

I must have been from a very early age, a flaneur, a wanderer, an observer of minutiae, without being aware of it, possibly born from the way of getting to school - never a car journey. I can't recall exactly when Mum did acquire the Hillman Minx/tank after eventually passing her driving test but it was certainly never used for dropping me off at said establishment. 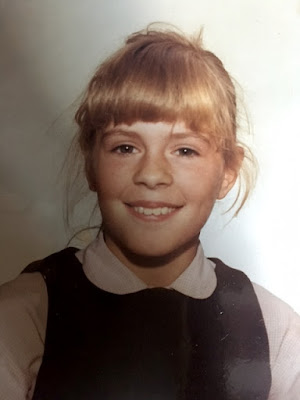 The school run for me was a long walk, probably made longer as school itself was something I would always wish to put off as long as possible. The journey started with leaving our block of flats, admiring the enormous English Oak that spread its evergreen leaves like a protective cloud over the gateway, down Colney Hatch lane, crossing over without getting run over.

Small digression here. I did once get run over by, and for some reason I remember clearly the car - a dark green Ford Zephyr. I don't know how and why the brain chooses to retain certain memories but this one was certainly well-etched. The thud of me against bumper, the tyre squeal, car door opening, scuffling of desperate man as he knelt and then scooped me up, turning and no doubt staring wildly about - 'where's this kid from? Help me!' Someone must have known, or maybe I was able to tell him as I recall passing under the tree, down the path and the door of the flat being opened. Odd that I can't recall more than that. Mother must have been in a rabid state of panic and fury as she had no doubt told me a zillion times about using the crossing... 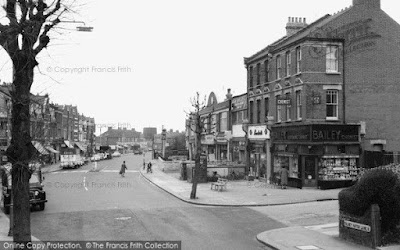 Colney Hatch lane, and the righthand road I would take towards school

On a normal day when I wasn't being run over I would take the zebra crossing, shudder at the sight of the dentist surgery (another tale) and take one of two routes both equally enticing for an unwitting studier of suburban London house-frontages and gardens. I still find the same fascination for front gardens which tell so much of the occupant's lives as I did then: ragged hedge or groomed, stone chippings, manicured grass, a cottage garden in Haringey or a dumping ground for a house already overflowing. At that time most people still had front gardens, a car if owned firmly resigned to road parking, very few gaping gravel expanses waiting for the metal occupant to return.

The majority of the houses I passed were probably 20s and 30s, this part of Haringey having exploded into expansion after the first world war. Bay windows, a touch of Tudoresque non-structural black-brown beams, an occasional false shutter or two after someone's tentative foray over the channel; painted woodwork - just before the era of aluminium ugliness and the later creeping white plastic tide. Blue doors, purple, red, green - that sort of dark London green that could have been distilled from privet and moss; usually the original doors that would have been supplied with the house, and mostly, sanded, undercoated, protected and repainted.

One of the houses had a then unusual feature of large wind-chimes. I can still hear the slightly mournful clonking sound of the large bamboo pieces, as eerie as a fog horn as I approached up the slight incline of whatever the road was. I have since been back, tracing the walks, the wind-chimes of course long gone, the dread of school thankfully also long gone.

I sometimes wonder if I can trace back the origins of my wishing to write about dystopian times to those walks; reflective time with no chatter from friend or parent, a time to consider even in my early adolescent-hood, (a period of life concerned with acquiring forbidden platform-soled shoes or who was in the top ten) what might happen in the future. Just as the being-run-over incident had been laid down in my mind I recall another moment which seems to have been a catalyst for these thoughts.

The day had been dim grey, the stick in my hand damp as I ran it along a clapboard moss covered fence: clack-clack-clack. A huge tree rose above the fence, a few brown leaves still clinging to its branches. I stopped the clacking and stood for some time just staring at the tree, aware that my feet should be moving in school direction but ignoring the unwelcome urge. 'What would happen if trees just didn't wake up in the spring?' The words still hang in my mind as clear as clean glass; that twelve year old me's thought budding into possible future stories. Supposing trees and bushes, plants in general refused to put forth leaves - some sort of silent protest about human's assumption that nature existed for their benefits. 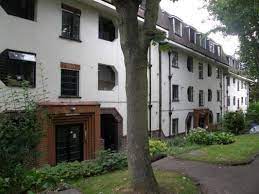 Seymour Court. Our flat being last on the right.

Posted by writing and other stuff at 04:58