The view from the hill, a 70s London childhood. Saturdays

No school. No work for Mum. She would be largely occupied creating some bizarre stew as far as I can recall. How odd it is to look back into one's childhood and not really be aware of what the parents, or in my case, parent, had been doing most of the time. Selfishly, I mostly recall her movements when it involved me; something probably quite normal in children, I suppose. Ezra did recently mention to me when we were discussing his childhood that we were 'just there' I don't think he meant it in an uncaring way like we were objects - standard lamps or chairs; we were there and his world revolved around him.

When she wasn't creating stews of pig heart or other unfashionable lumps of meat she was probably trying to tame the mess of the flat. I did help out however, my main job of the weekend, to go to the washing shop. Furnished with enough coins to buy a sherbet fountain and a copy of the Beano, I would walk down to Colney Hatch Lane's parade of shops, buy the items and enter the fuggy warmth of the laundrette - a largely yellow formica establishment with a row of smaller top loader machines, larger front loaders and the three rumbling industrial scale tumble dryers. Having stuffed the clothes into a top loader I would add a dose from the washing powder machine ( I can still hear the whirring sound as the powder dispensed) add the coins and if it was a chilly day sit down with my back to a dryer feeling the comforting warmth, half listening to the sounds of trouser buttons and bra straps tinkling around the drum. 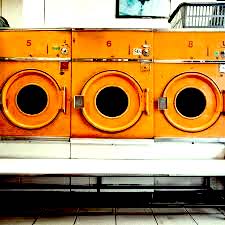 Saturdays also meant shopping, usually at the local fruit shop, butchers and all the other little shops which were eventually crushed by supermarkets. The most exciting shop, apart from the woodyard with all its dense resiny smells where I used to buy small amounts of sawdust for my various rodents, was the Greek Shop'. This to my mind is what grocery shops should be like: teetering shelves of exotic packets, tins, cases of citrus fruit, tins of olive oil, paper bags, shoe laces, allotment produce; anything and everything. The shop was always busy with locals chatting about the weather, football, the government and what foodstuffs the owner had managed to procure. Once when I went in under instruction to buy tinned tomatoes a small stampede of housewives were vacating the shop, screams knifing the air. Apparently a black widow spider had been discovered in a box of bananas.

The other shops I recall were an excellent chippy where I was sent at least once a week to purchase a treat of cod and chips - often I would go accompanied by a mouse or two clinging to my jumper which seemed to perturb no one. The bakery must also be mentioned as along with fabulously awful iced 'torpedo' buns it had a special cabinet of broken biscuites which you could help yourself to with an aluminium shovel.

If Mum had the time she would take me and a friend to the swimming pool at Southgate - when she had eventually passed her driving test (another tale). We would scramble into the back of the tank-like, Hillman Minx, each trying to avoid the part of the seat with the protruding spring and Mum would drive to the baths were she would swim majestically in flowery bathing cap and we would shriek along with all the other kids in the deep end. The wonderful trip would culminate in a bag of cheese and onion crisps my friend and I trying to outdo each other in making each pungent potato slice last the longest. 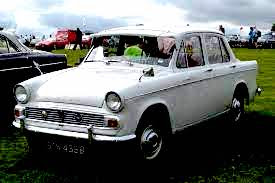 Posted by writing and other stuff at 06:10