Ooo long gap. Have been very involved with 'La rentrée, and all that entails in France. College rather than school for boy person, new school of music pupils for the tall one and endless lists of things that have not been achieved after everything went a bit 'baggy' over the long holidays.

All house appliances decided to give up in celebration of the tax fonciere bill, and much time has been spent trying to fix things in Cuban style with some success . . . never throw out your 18 year old cooker as it attempts to shuffle off this mortal thingamy, take it to Parchemin (excellent recycling place in Limoux for those not familiar to it) where they will probably manage to repair it.
Anyway, history, yes.
Everything is history, is it not — the sentence I am writing will be history as I put in this full stop.
Not quite the falling of the Berlin wall, but some sort of history.
The painting here is the second in the 'train window' series — based on a sketch I did from a train in 2006 from London to Poole. The forms seemed to suggest mainly the greys of travel through London outskirts and industrial areas around Poole. When I had nearly finished the painting I found the 2006 diary and looked at the day. Oddly it been a 'greys' day, in weather and the fact that I was going on a quickly arranged journey to see my mother who had suddenly become seriously ill.
Historically it was an important day for me. My mother is normally of a strong constitution, and the uncertainty of what awaited me was a new and worrying feeling. Although the sketch was created by hazard - my hand trying to capture lines of passing buildings and structures, the anxiety seems to be captured in the turbulence and spikes of the image. 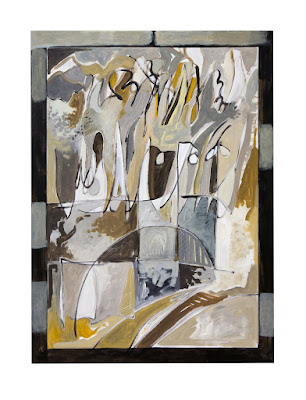 Posted by writing and other stuff at 22:22

Email ThisBlogThis!Share to TwitterShare to FacebookShare to Pinterest
Labels: Art