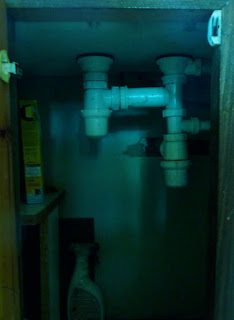 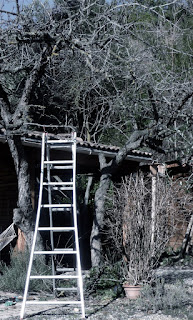 Today we will reflect on the joys of the aforementioned items.
I hate plumbing: cold, greasy, back aching, infuriating, not that I really do plumbing as such, and I totally admire anyone who can.
Yesterday I attempted to unblock the sink, then Mark tried. The trouble with old under-sink situations is once you tamper with one bit, everything else decides to fall apart: leaking joints, weird noises, emergence of noxious black stuff.
As it was beyond us, I called in a friend.
In the spirit of trying save money he replaced lots of bits and grunted/swore for quite a long time before deciding the whole contortion of pipery was in fact, dead, and a trip to a DIY emporium had to be made.
No leaks now, but the mysterious noise has increased and the water is still not really going away as it should. I decided to get away from the darkness of the fetid under-sink-cupboard and concentrate on pruning.
Pruning is fabulous. Up and away with the birds, moments of adrenalin terror as the badly placed ladder wobbles; thinning out the dead wood and cutting away branches reaching for the sky. Every time you learn a bit more — it is a good idea to wear gloves, go on . . . cut that really big branch, shape, bring air in, tangle of useless twigs out. The pears are done, now for the huge almond tree. Free therapy.
Posted by writing and other stuff at 03:21