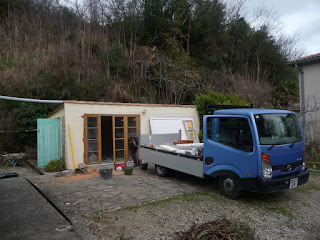 Instead of shack on pine clad hill, (last post) I am building my own studio (woman shed) out of half of our garage.
When I say I am building, I mean our super builder is doing most of it, as my DIY skills don't really exist except in my head. Mark can build things, but in a parallel universe where time is of a different length.
'The stick', a piece of timber which once edged the tongue and groove wood in our bedroom since 1975, has been hanging at a jaunty angle since we moved in 3 years ago. It has been discussed over numerous cups of morning tea, but it's still at the same position. Imagine thus the enormity of a studio build project . . hence bank loan and builder.
Here is a photo of garage becoming studio (sorry, painfully boring except to me). Today I painted it again, and it is now a clean bright space. It's the first time I've had an actual dedicated studio space or shed to retreat to. The thought of being able to say 'I'm going to my studio for a couple of hours' is novel.
No through traffic, no one asking for a cheese sandwich, or the whereabouts of their pants . . .
Posted by writing and other stuff at 10:17