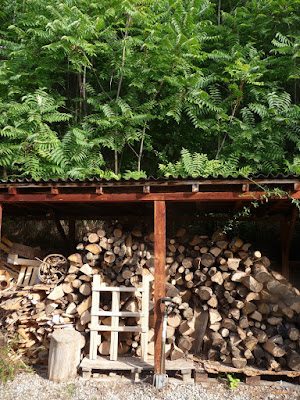 In Autumn a young man's fancy turns to the thought of . . . how to keep warm.
The impending time of soup, fires, healthy striding walks in frosted landscape. Shit.
No, its not that bad really . . . I just hate to feel that time of freedom, carefree dressing etc, ebbing away. Those dark mornings, cringing in the bathroom, fumbling for a pair of socks in the semi darkness. Anyway, hopefully a good few weeks to go.
This the new wood pile, handsome is it not. Not very well formed when one looks closely, but then I always say, or rather I said yesterday: a person whose woodpile is immaculate has too quiet a life.
The wood delivery people are called 'Belamie' delightful name, and delightful family. The mum and dad watch with pride whilst the 'boy' huge seventeen-year old or thereabouts wields the chainsaw on the truck.
This time we all watched sadly as one of the tyres on the lorry deflated with a pathetic hissing. I paid them extra as the culprit nail looked suspiciously like something from our compound. They assured me this could not be so. As I said: Belamie - good friend.
An enlightening thought has just occurred - well, something that is of enlightenment to me. When I lived in a filthy, post-student, crumbling house in West Norwood we had a landlord named Mr Bellamy. One pronounced the word with the accent heavily on the bel rather than the amy. It never occured to me to think of the origins of the word. But then this is several decades ago and my French was limited to 'der beers si vous plate'.
Mr Bellamy was about as far as one could get from a good friend. A miserable bastard dressed in biege acrylic, he ignored the fact that the loo froze in the winter and that there were mushrooms growing out of the skirting boards, just kept taking the rent. I wasn't even allowed a cat, which I did obtain - "Hide Wandsworth, Mr Bellamy has arrived for the rent."
Anyway, back to the wood pile.
The trees growing or rather rampaging behind it are some sort of weed tree that came over from Japan. I rather like them: Amazonian in character and lushness, they hold the soil down, and (hopefully) stop the bank collapsing. They do need a bit of a cull however. We have had the annual Autumnal discussion, 'to have a chain saw or not to have a chain saw, that is... etc. As usual we have decided it's too scary so it will have to be the previous house-owners dressed in shorts and sunglasses ploughing through the undergrowth as effortlessly as if they were cutting flowers.
Posted by writing and other stuff at 22:56