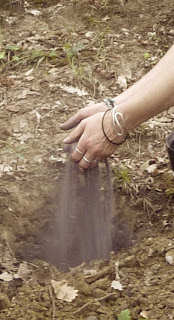 I'm trying to help Ezra read one of his set books: the Victor Hugo classic 'Le dernier Jour d'un condamné.' It's a fascinating reflection on impending death. There's a quote about thirty pages in, roughly, and I mean roughly, translating as, 'all men are condemned to die, albeit with some sort of a delay.' I've been thinking about it ever since and it was particularly relevant today.
I went to say goodbye to the dear friend mentioned a few posts back. Someone who should have had a very long delay, or less oddly put, a much longer life.
It was a beautiful quiet little ceremony in the middle of the woods next to her house: just the sound of gentle breezes in the trees and some late summer grasshoppers. Before the scattering, I spent quite a long time in her house looking at the elements that made up a life. The things we accumulate, the few treasured items that might depart with us: photos, a talisman, a favourite book, a pressed flower from a poignant time.
I always get pathetically emotional at any funeral. Even if it had been someone I met once in the post office, my eyes would have become blurry with tears. It's something about the finality of the coffin, or the container of ashes; probably more so with the latter. That small pot, containing what was or still is in some way, someone we knew.
Posted by writing and other stuff at 14:54