This is my least favourite time of year in our town.
The fairground arrives and installs itself in all its neon splendor for a week. Having said in a recent post that Ezra had lost the urge to throw money away on the cakewalk machines, he suddenly found it again.
We all went down 'en famille' to the throbbing streets. Candyfloss, soft toys the size of cookers, and rides guaranteed to make your intestines want to come out and explore for a while.
Ezra dutifully fed a couple of euros into the machine and this time it spat out a plastic card saying you have won a thousand points. Excitement! We were rabid with it, until we realised that a thousand points would reward you with . . . a small plastic slinky to play with on the stairs.
He also tried firing at cans and won a plastic bead-shooting plastic gun in a plastic box which failed to work on returning home. I was impressed however that he immediately took it apart and used the springs for something else.
We somehow avoided buying chips, watched ten minutes of the fete band that were playing to a small crowd on the main road, and wandered home thanking the Lord that that was it for another year. Except Ezra wants to go and try firing a gun again . . . well, he is fourteen and a half, testosterone and all that . . . 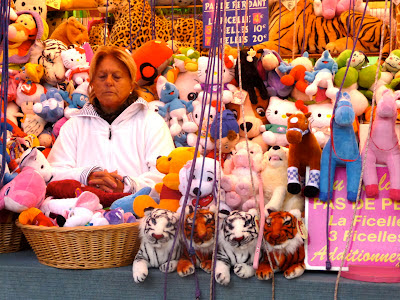 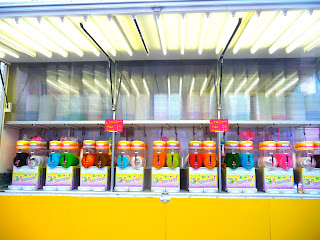 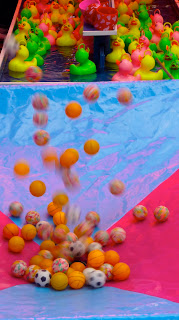 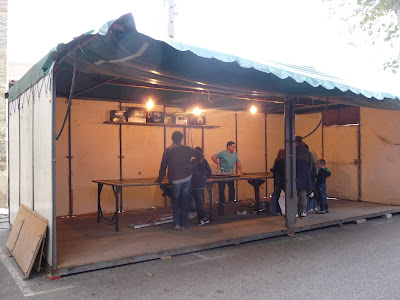 A few pictures of the stalls. A woman praying amongst furry smufs, duck-hunting game, toxic waste outlet drinks stall, and a weird shack where there was some dodgy roulette type thing going on — straight out of Havana.
Posted by writing and other stuff at 05:34