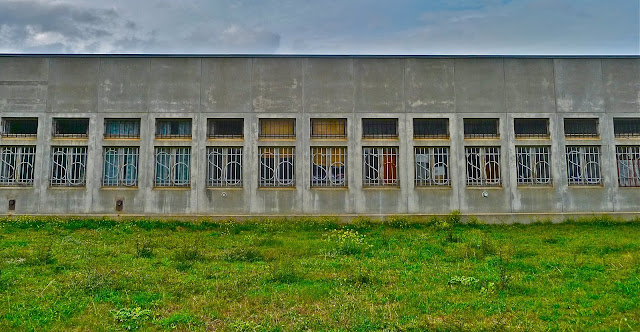 I stumbled across this grey concrete slab-fest in a 'cartier' of Limoux that we had not explored entirely.
I was intrigued as to why the word SO had been painstakingly welded into each window railing.
An English enclave in the town had built it in the 1970's as a retreat from the French perhaps? a shelter for the partaking of marmite on toast, strong tea and and bit of British self-deprecation amongst the blustering confidence out there
You know nuzing of patisserie. SO.
Your wezer is rubbish. SO
Nous, we 'ave three automobile companies. SO.
On closer inspection the letters were actually SC. Hmm . . . Society of Crêpes? Chardonny, carnival?
Actually when we walked round the front it was clearly the 'Secours Catholique. I think they should have painted it a nice heavenly blue though.
Posted by writing and other stuff at 11:28