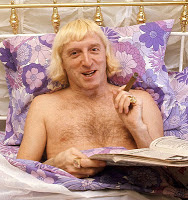 Another happy memory of the 70's crushed.
Well, not exactly 'Sir' Jim, but all the stuff that went with him. The tacky show, the big chair, Top of the Pops.
Gary Glitter - I think I always felt he was a little worrying with his ball-hugging silver trousers and twisted facial expressions. But M Saville, weird, yes, but so much a part of the Dream Topping, Angel Delight and Arctic Roll world of that time. As sure as the Beano would be in the newsagents, and your nylon shirt would crackle as you pulled over your head.
Good job he's moved on really. Hope he's going to return as a lonely dung beetle forever pushing a ball of turd across an empty freezing tundra.
I still feel cheated though. I suppose I might have had suspicions as an adult but as a twelve year obsessed with 'MUD' at the time, he just seemed a cheery chap devoted to making our dreams come true.
Just look at that bed linen — we had that in yellow.
Posted by writing and other stuff at 23:45