In time honoured tradition, we settled down armed with nibbles and sarcasm to watch this years song offerings from across Europe.
I did find that most of the time I was roughly calculating just how many euros had been, and were being, flung at this sparkling celebration of . . . what, really?
I believe the original aim of the contest was to heal war-created wounds and provoke love and friendship; the object now appears to be to spend as much as is humanly possible on one evening of terrible music, elaborate sets and crazed light displays.
It's not the same watching in France as it used to be in the UK. Terry Wogan was a master of the piss-take, and I believe Graham Norton is following in his footsteps most satisfactorily.
The French maître de cérémonie was far too serious, believing, or at least doing a good job of believing, that France's entry from Twin Twin were going to carry France to certain victory.
I must digress to say that this group of small maniacs with big hair were not destined for great things on the evening. The song seemed to be about wanting a moustache: possibly along the lines of the now-disgraced Rolf Harris's All I want for Christmas is my two front teeth (remember that? I think I do, or maybe it was a surreal dream I had).
Ezra looked them up on Spotify, and, apparently they are very popular here. . . but perhaps not in the rest of Europe, coming last of the 26 countries with just two points more than the various nul-pointers of previous years...
http://www.nulpoints.net/halloffame.htm

So, the highlights, or what I can remember of them between Ezra shouting: Mum, Dad, go to bed! as we nodded simultaneously like two faded, nodding dogs on the back shelf of a car.

1/  Well he had to win, didn't he: a bearded diva in a gold dress. God knows what he was singing about but it was all fabulous, especially his teeth. 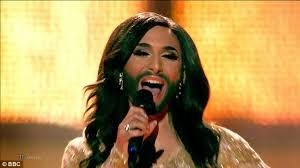 2/ Poland. Dressed in traditional costume, singing about their hot Slavic blood - Miley Cyrus-like, but worse, with a huge-busted wench at the front of the stage pounding a milk-churn with a phallic-looking pole thing.

3/  Mad people from Iceland, all dressed in bright blue/pink/yellow suits - a bit, OK Go-rip off costume wise, but we liked their cheery lyrics about getting rid of prejudice etc - different as most songs consisted of adjectives, but with absolutely no meaning.

4/ A group of handsome young men singing utter drivel, but we liked the whistling and especially the banjo playing. Norway?

5/ The Dutch one was quite good apparently, but I'd gone to the loo.

7/ No vampires for Roumania this time, but a teethy man standing inside a circular keyboard while a woman warbled on about knitting, love or something - can't remember.

8/ The hamster-man in a large wheel, think it was the Ukranian entry.

As I sat, jaw slack with disbelief at the awfulness and cost of it all, I thought back to the 1970s when I used to watch the programme in London with my godmother.
Yes it was bad, really bad, but there was something homely and village fete-like about it then: white teethed, keen young folk singing about innocent things.
I searched for a memory of something cringingly-bad, and representative of that time, other than the planet-conquering Abba. Then I remembered Brotherhood of Man.
Of course there it was on uncle Youtube, a glimpse of 1976 Eurovision: teeth, hairy chests, flares, dog pissing on a tree-inspired dance routine, and REAL orchestra!
I read on Wikipedia that in 2004, there was a ban on groups playing their instruments live . . . why?
The best part of the event this year, we felt, was the introductions to each country and group - inspired in fact. Each team apparently going though some art process which would then reveal the flag in various ways: dominos, sweets, coloured motorbike exhaust, ice pucks, lilos in a pool, embroidery, etc, etc. It was worth watching for that.

I had loaded up a vid of Brotherhood of Man but it's been removed from Youtube. 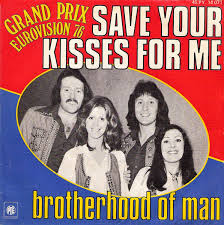 Posted by writing and other stuff at 05:49