Most car parks are fairly unmemorable but this one on the outskirts of a small French town, whose name I can't recall, was most memorable for two reasons. One, that there was an overladen peach tree of the yellow variety (think the ones that appear in tins) that no one seemed to be interested in harvesting, and we were interested - out came the bags from the car for just such an opportunity. A memory to store up for winter - fuzzy-skinned, sun-yellow peaches, plucked from a tree in about forty degrees as the cicadas whirred manically all around.
The other reason for the car park's notability was this art piece. 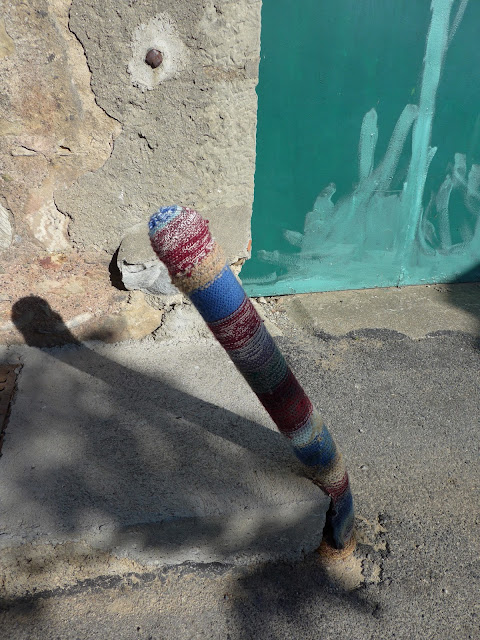 A bollard with a special knitted casing. Why? Not the cold evidently, and generally metal bollards wouldn't need a knitted protection against climate. Protection then for someone's car who was in the habit of repeatedly crunching into it? Possibly going by the bent nature of the post but I can't imagine a thin layer of wool would make any difference; a wrapping of loft insulation perhaps, or a gaffer-taped sleeping bag if you were really anxious - and judging by most French cars, and ours, no one's really that bothered by the odd prang.
I think it must be a statement: a woolly phallic statement about territorial parking rights or maybe it's an example of a new phase of Free running - Free knitting in the environment. Anyway, it works well with the experimental garage door painting.
Posted by writing and other stuff at 21:43