With additions . . .
I was sent an email a week or two back from friends I had managed to lose touch with, oo, eighteen years ago, or so. They wanted to come and stay in our B and B - all four of them. I remember the first baby Phoebe vaguely - as I remember most very small children: small, head, legs, etc, but was unaware of a second child.
So they arrived bearing wonderful gifts of (see last post) TEA! much tea; some of which we drank sitting on the terrace in raging heat waiting for the growling thunder to turn into a storm (which it didn't).
So, eighteen years (ish) and nothing much had seemingly changed. We (parents) were obviously a little more lined/chunkier/hairier/less hairier than we had been; the children now graceful and willowy teenagers. I wondered if I had ever been graceful and willowy . . . I think perhaps not so much, but then it was the era of PERMS and mega-flares made of indescribably horrible fabrics so maybe I had an excuse.
Anyway, we clicked back into chat as if we had only said goodbye a week ago after a nice dinner - as it should be with good friends. Hopefully it won't be another eighteen years before we catch up again.
Bon continuation tous les quatre, et a bientôt j'espère. 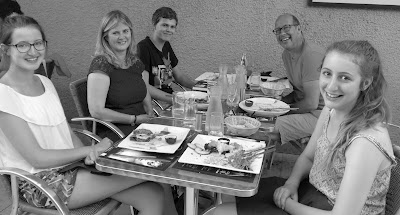 Posted by writing and other stuff at 02:10