Bronzino has been with us about fourteen years after someone said did we want a ginger tom kitten.
Good timing as our small runty cat, (Scrabs) had been stolen by someone passing by in a car, according to our neighbours of the time  - odd (and sad) as he really was runty.
We went to see Bronzino (who was living in a car at the time as the person had twenty or so cats in their house) and decided he would fit into our lives just fine.
And he did fit in; a perfect feline, really. Not too clingy, but happy to occupy a lap in front of the fire in winter. He caught mice, rats and rabbits, and, as if having listened to us, not too many birds.
He had his territory, would see off other cats, and would follow us (pack of assorted humans and dogs) down the road until his self-appointed patch ended and would yowl plaintively as if warning of dangers ahead to be encountered while visiting the bread shop, chemist or whatever.
I never had to take him to the vet and he was a good solid specimen of feline-ness until recent weeks when something happened internally and he shrunk into ultra old age causing Mark to finally take him to the for-mentioned place.
I will eradicate those final few weeks from my mind and think of him as the ginger king of the garden that he was. 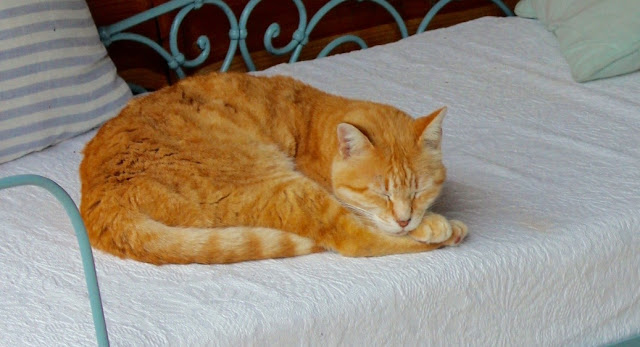 Posted by writing and other stuff at 05:06