The mysterious allure of knobbly gold-chocolates

Perhaps it's the same elsewhere, but France's supermarket shoppers seem obsessed with Ferrero Rocher. We usually receive a box or two from Mark's piano students, but this year there were many boxes under the tree, including the most landfill-esque version we have yet seen: a giant, thick plastic cone, I suppose meant to resemble a diamond . . . this shouldn't be allowed under packaging laws - if any actually exist. 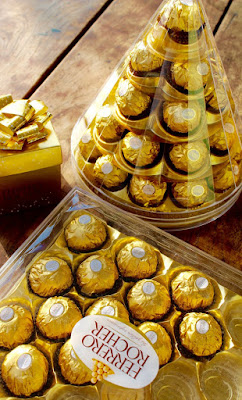 Amongst the many mysteries in the world sit questions surrounding F.Rocher: why do people buy them? They taste like . . .well, a blob of Nutella with sand in it. The actual nut is fine, but I'd rather just have a bag of hazelnuts and forget the sugar, gold foil and gleaming plastic.
It's kind of people to give Mark a present after a year of lessons, but why not other chocolates? Our biggest local supermarket had a chocolate section far bigger than the fruit and veg area; towering displays of everything from milk/dark selection boxes to chocolate covered hamsters, so why purchase F.R? Is it the marketing? the safety in buying something that is recognised/everyone will like (not); the price? - I had a look out of curiosity, and, nope, lots more quality-branded stuff at similar or cheaper - so . . . I think it must be a present list thing - check list: ah yes, fifteen presents to buy for not immediate friends or family, "grab fifteen boxes, Anton," done.
Other chocolates sitting about in the house call out: "Eat me . . . come on, you know you want to." But the Nutella blobs don't have this effect on me, or on other members of the family (maybe the dogs, but I haven't offered them any, hounds being allergic to choc apparently). Mark half-heartedly ate one or two, but the boxes were destined to stay un-opened/be re-gifted until we had an idea of creating a festive pud with them, as no-one had got around to making a more traditional one.

Get a big bowl, put knobbly chocs and cream in and beat (I liked this bit) with a rolling pin, put in glasses, add a layer of red fruits, a layer of crême anglaise and a blob of cream on top. 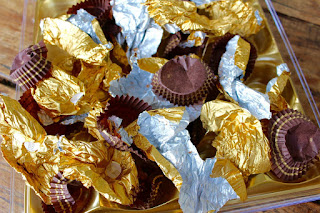 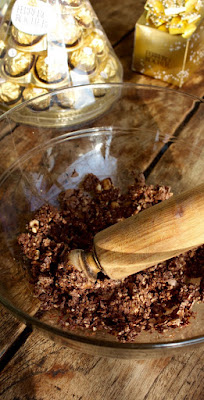 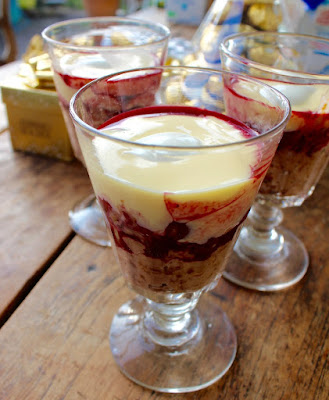 Posted by writing and other stuff at 21:53