Being in a play

It felt like it down at the vet's yesterday.
I only went in with 'lampshade dog' to get her wound looked at and there was drama. On a small scale, nothing Hollywood-esque but the whole spectrum of emotions on show.
A man had brought in a very hairy and ancient dog. While the man was talking to the receptionist the hound shook itself releasing a cascade of ticks. Women shrieked; the man left the reception and started squishing the ticks; a vet appeared, shouted a bit and and joined in while I ran about pointing out escaped ones. The floor was quite disgusting with streaks of blood and small grey spots of ex-tick.
After the squishing, the vet asked me where our dog was and I explained I couldn't get her out of the car as she is now so terrified of going into the building. We pushed and pulled her out of the car and into the surgery where he syphoned off a load of yucky stuff from her leg and said all was well.
I paid and swiftly left as Bali was attempting to lick up the tic blood, and a completely out of control mega Heinz 57 mutt had been brought in that had maiming and killing written across it's brindled brow.
Bali wouldn't now get back in the car. While I was stuffing her in, a woman came out from the vet's, face red and blotchy, shaking body, eyebrows converged in that sort of abject misery that can only mean something very, very sad.
She stood, unable to even unlock her car as her hands were so tremulous, tears starting afresh. I wondered if I should do something - that weird moment when you feel it could be further upsetting for the person if you enquire, or suggest help.
Shutting the door on the dog, I went over and did enquire.
"Mon Chien est mort!' The dog had died under anaesthetic. The eyebrows converged more, so I hugged her. And she wanted me to. How weird and strangely wonderful that humans can make contact like this with a total stranger in times of immense sadness. I know I would have wanted the same thing.
She then apologised for having bothered me! The French politeness thing had stepped back in. I told her that I could sympathise as our old dog had been put to sleep the year before. We smiled sadly at each other and I drove back wondering at how rich in drama twenty minutes of a day can be . . . 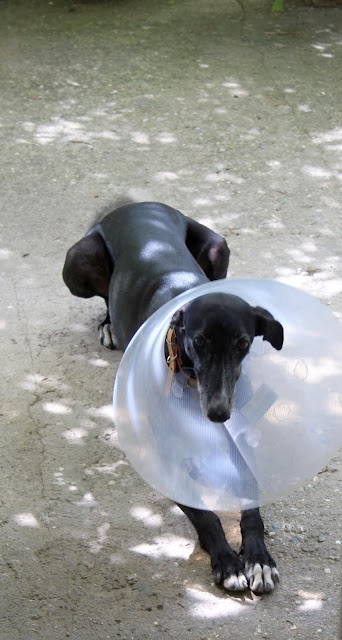 Posted by writing and other stuff at 04:24