We learn something every day

Like, be extremely careful when grinding coffee when tired, hungry and you are using an old machine from the 1970s with no security thing.
So, yes, I know now, after an emergency trip to the doctors this morning, and will certainly be eyeing that small beige and smoked-plastic lidded appliance with fear and a certain respect in future. Mark jumped to its defence after the event and assured me it was fine and that he will always grind the coffee from now on . . . As he is a pianist, I'm not sure how sensible that it. I feel a flea-market trawl coming on for a different model (coffee-grinder, not husband).
Anyway, I was useful down at the surgery as there was some sort of small meeting going on about who should do what, and at the centre of it, a very young bearded man wearing a 'Let's go Surfing' T.Shirt. Yes, he was the student doctor doing a trial period, and I was to be his relatively interesting patient (compared to haemorrhoid checking and poking about in people's ears, etc, I probably was).
One of the senior doctors showed us into a room and explained where everything was: plasters, needles, aesthetic stuff . . . and then left.
He asked what I felt about pain. I said 'Fab, love it, thanks.' He got the irony, snapped on some bright blue plastic gloves, placed a small, paler blue 'table cloth' over me, and a still smaller one with a hole for the finger over my hand. Just like ER, except it was deadly quiet, no trolleys being wheeled frantically about, talk of 'paddles', and screaming relatives. We talked about Brexit, which was more painful than the needle he jabbed repeatedly into my index finger, then he sewed, tongue sticking out slightly, just like I do when attaching a button.
The 'real' doctor returned and inspected the work, said it was excellent and then they both said it should all be fine but to rush to the main hospital if it turns black or hurts a lot more. I bestowed much thanks and we returned home to have the delayed breakfast, after Mark had cleaned out any me-debris from the grinder.
So, I'm writing this with a finger throbbing like the walls of a disco but so far it looks a fairly healthy pink, and I'm excused from doing any washing up, which is more than good. 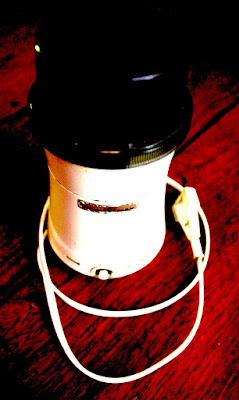 Posted by writing and other stuff at 07:21