And this is a big one . . .
The boy, off on his own into a big city and us knowing the readjustment is looming a couple of months away. Eek.
I just spent two days in Bordeaux with him, traipsing the well-maintained and decrepit pavements (the latter where he will be living) visiting estate agents, along with herds of other weary parents and uni-ready offspring.
Manically checking the various flat-suggesting internet portals had revealed almost zilch for the taking, and anything that was available had a queue of rendezvous attached to it.
The son's expectations (fuelled by us staying in an 'arty and cosy' Air B and B - which it was) had started with an idea of a modest (22 sq meters) but elegant apartment with high ceilings and perhaps a small balcony on which to tend a small garden and sip the odd Margarita, rapidly dwindled to - 'well, perhaps, 15, with a window, preferably'. Yes there are places offered without windows, and even biscuit tin-sized flats of EIGHT sq meters; the size of . . . a generous toilet cabinet?
The bigger estate agents (company not employees) we visited were also weary, the smiles tired and wry, the same words projected, brows furrowing at my mention of our maximum budget - slow shake of head, suggestion of something possible . . . 'ah non - pris, ce matin' - taken this morning; too late, then the inevitable comment that Bordeaux has more and more students and less and less accommodation.
Alors. What to do . . .
A couple of hours and two bowls of Tai soup later, we did find an agent down a back street who was less weary and did have two things to show us.
We followed him keenly to the first - a once elegant stone building - and entered a dismal, lino-infested 'space' with wonky cupboards and the inevitable coating of semi-opace white on everything that certain landlords favour. Poor lad, I watched his face pale to the wall-colour as he took in the sight of his possible future logement, the worst feature of which was the very small window that looked out onto an impressive view of pigeon-shit and a blank wall.
The second place was cheaper, in a hideous 80s block but did have a tiny 'balcony'. In my optimistic 'stylist' mind I could see it working - lots of plants, a better view, but finally the interior and the miles of depressing corridors, which the agent did refer to being 'prison-like' and like Hell if there were ever to be a fire (great salesperson . . .) was too awful and we turned to tea, cake and a long think. 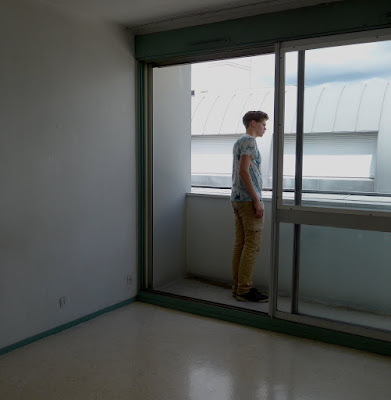 Peculiar, aquarium-like flat, and boy trying not to howl

Just as the second 'oriental pastry' was being consumed back at base, we found a newish ad on 'Le Bon Coin' - a 13 sq meter flat - ridiculously small but did have a mezzanine bed area. We rang . . . and it had gone. Shit. But the guy did have another - bigger, a tad more expensive but within our budget. He said to visit now, so we did - just a nip around the corner and there it was: the future logement: tiny, weird pink colour (but we can change it) with a window! Okay view of similar ancient stone buildings and a few mins walk from the art college. 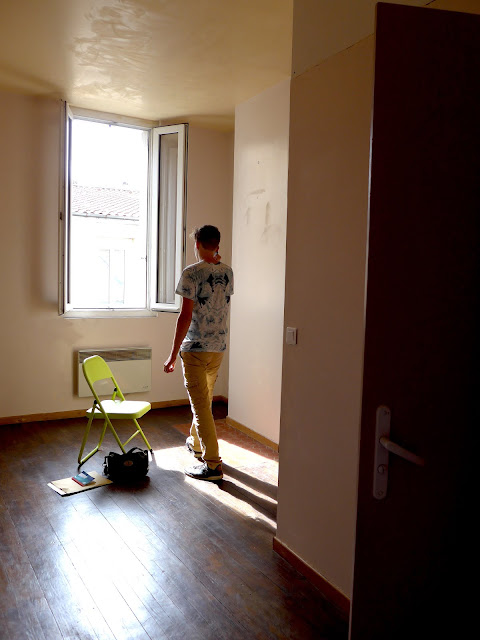 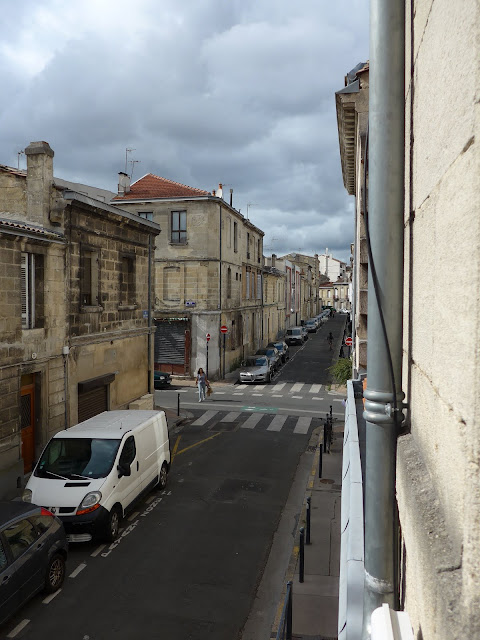 We said yes, did a bit of paperwork, went to eat and drink a little more extravagantly than I might have wished (but W T Hell, we'd done it) and then I lay awake most of the night worrying about various aspects of the accommodation: no storage space whatsoever, would he be able to play his collection of instruments there without getting evicted? why had the building next door disappeared? and would his flat be very cold because of that; where on Earth would the water-heater have been in that space? - was there one? etc, etc . . .
But this morning in the rational light of day I recall my own student dumps, what you made do with and got around, and it was fine, and he'll be fine in this new life-stage.
Posted by writing and other stuff at 23:30