Rather than my usual stay in St Athan's hotel in Bloomsbury, I decided to try somewhere in the East end as I was going to be doing some research for my book.


* * *
I drew the curtains in my ex-council flat B and B room and looked out on a clear day - unlike my last trip which had been of curtailed wanderings due to lashing rain and old Puma trainers with holes. I still have the trainers with holes as they are the most comfortable footwear, so put them on (with other clothing) and set off with a clear plan - which lasted about seven minutes before I'd got distracted by gasometers, an Austin Allegro, inviting side roads going the wrong way, etc . . . 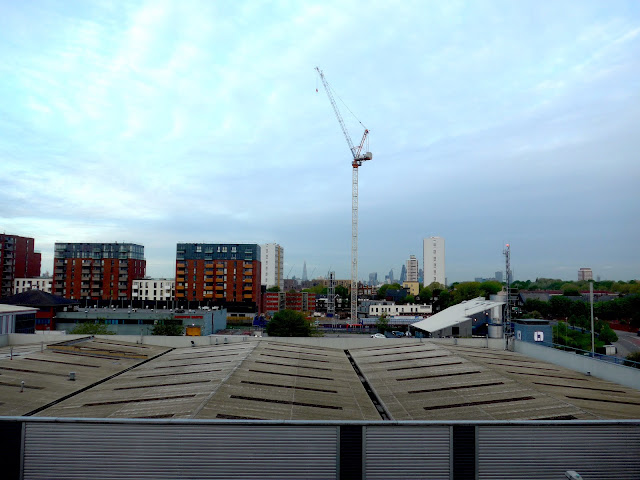 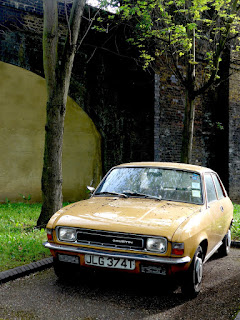 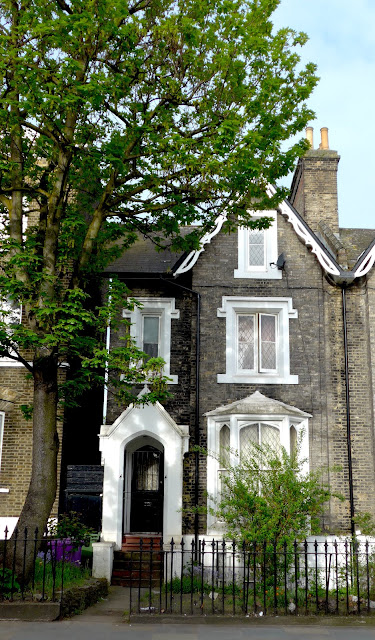 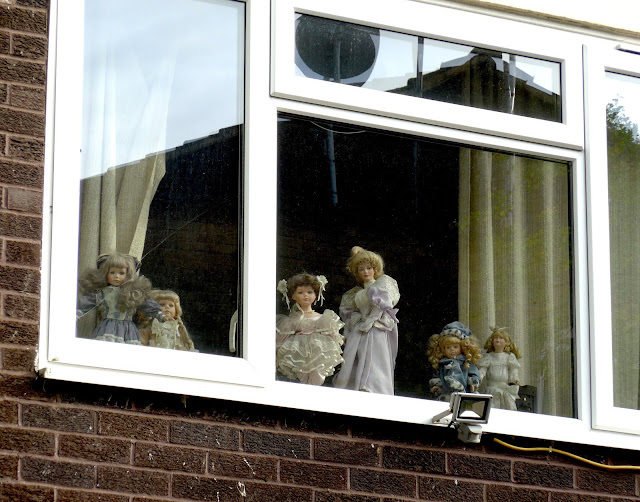 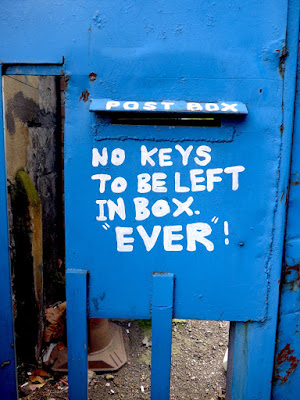 After a detour, I arrived at Victoria Park in Hackney where one of my characters (Jake the Prophet) lives in a shed (book is set in 2072). I'd forgotten what a beautiful park it is, especially on this bright spring day - the horse chestnuts were looking particularly magnificent. I conversed with people about their dogs, and one man about fishing. He (pictured below) told me there was perch, dace, bream and trout in this lake. When I asked if he eats the fish he catches, he laughed, 'God no - I'm not European.'
'So, it's just the thrill of the chase, then?' I said.
'Yep - better than sitting' at home and watching day time T.V.'
I agreed it was. 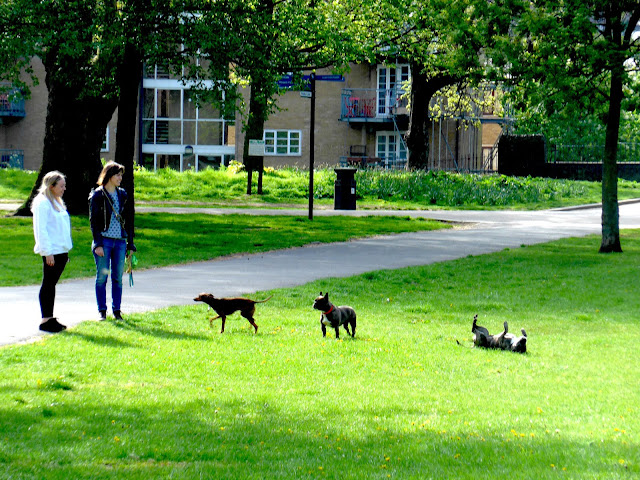 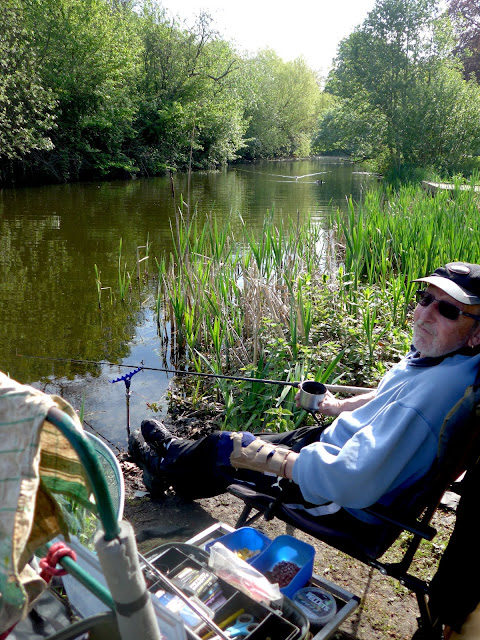 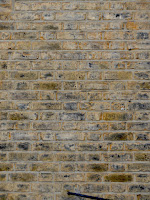 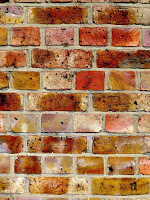 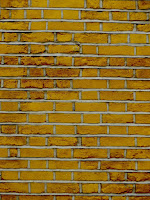 On from Victoria Park, I passed through many streets which I meant to write the names of and then highlight on my NEW huge London map, but failed such was the excitement of discovery.
I visited Hackney city farm, got lost, emerged somewhere on a very busy main road and then took more back roads to suddenly recognise the very groovy Hackney Broadway Market road with its eclectic mix of ironmongers, funky cafés organic shops and the sort of clothes shops I wouldn't dare enter.
The owner of a very beautiful fish shop remarked that I looked lost. I said I wasn't (at that point) but was just reminiscing - possibly with a glazed expression like one of his fish - of how London that I knew in the 70s 80s and 90s has changed. We chatted for a bit and I congratulated him on his fish display before moving off to look at the magnificent eel and pie shop. I did once eat eel in there after being warned by an old guy - 'tastes like bloody pond water' and he was right except he didn't say it was also mainly composed of sludgy gristle and bone. Their tea was good though.

I paced on vaguely in the direction of Old Bethnal Green Road (as my stomach was suggesting it was time to eat, and there's an interesting café called The Common E2 there who follow me and vice versa on Instagram) and passed by a million fascinating things - urban trees delighting in the sudden warmth and sprouting forth magnificent blossom, building sites, afore-mentioned gasometers, old signs, people strolling and people arguing - this was a good one: a stunning, ruby-haired woman walking manically down the street, child in tow, with lover/partner/husband running, catching her up and falling to his knees - 'Babe, I'm SO sorry . . . please don't do this.' Woman: 'Fuck off.' Man running on and doing the knee thing again: 'REALLY - just listen'. Woman: 'I said, fuck off', etc, etc. I turned the corner at that point but I think it was likely to continue for a mile or so.
Then as an antidote I saw this most beautifully- attired old(ish) guy and just had to ask if I could take his picture. 'Why?' he said with a smile. I gestured to the hat, tie and the whole wonderfulness of his being and he nodded after a quick adjustment to his tie pin. 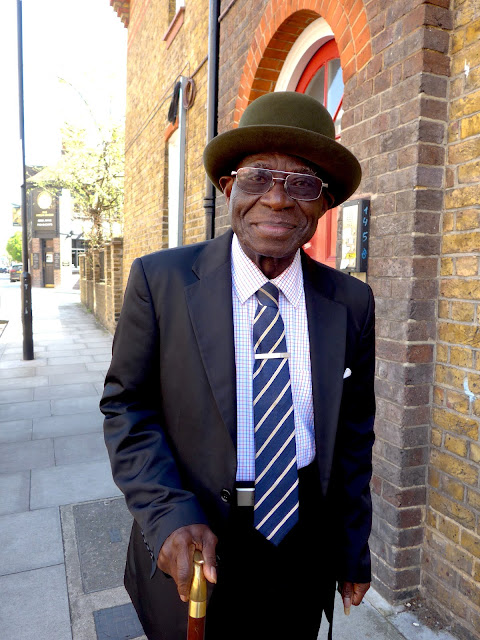 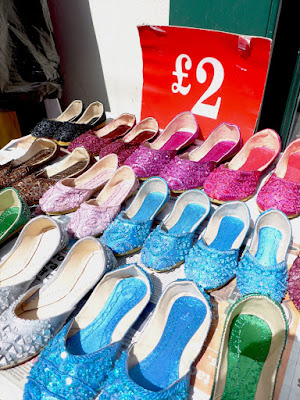 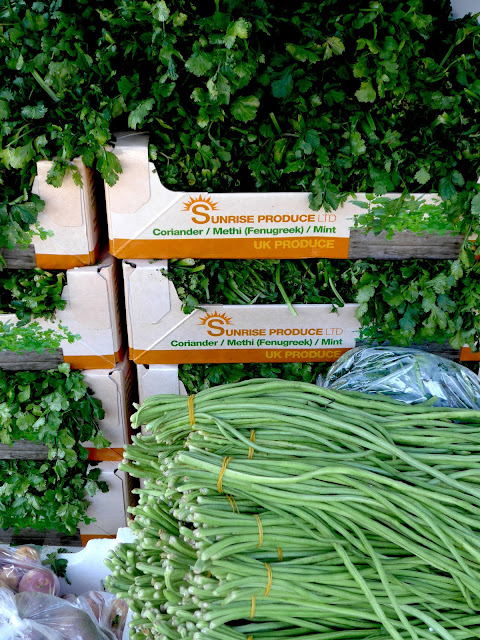 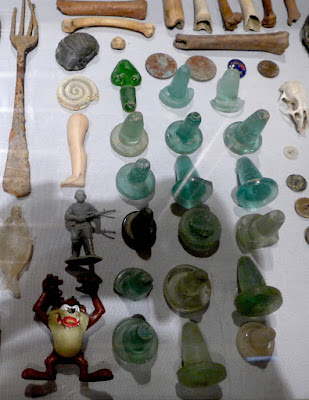 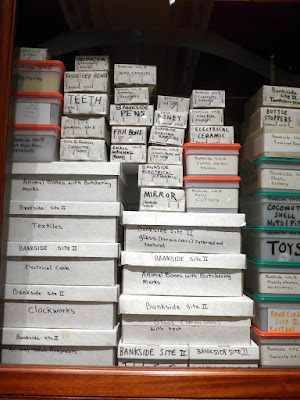 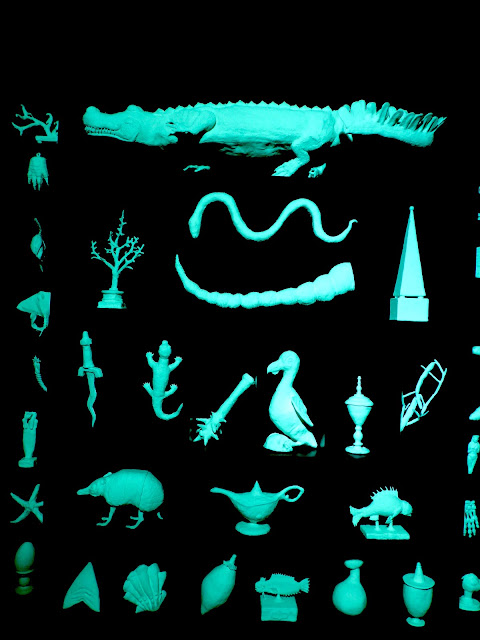 Another work, which I would LOVE to have been involved with was Dion and a team of 'scavengers' removing things from the Thames's mud, cataloging and then arranging them in a magnificent display in a giant hardwood cabinet.
The expo continued upstairs with many superb and gently wry-humoured drawings; then on into a dark room in which you were greeted by green luminescent creatures and objects. I could have stood and ogled for hours except the lure of the Thames was pulling me Southwards.
I left the busy high street and wended my way in the direction of Wapping, and wend I did - much distraction and so it should be on a derive.

At Wapping High Street I walked a longish way encountering practically no one except the odd dog-walker until arriving at London bridge where about half of all London visitors had gathered like some noisy seagull nesting colony to eat ice-cream and drink cocktails.
I'd quite like to have seen a few ravens but decided to back-track and go in search of The Prospect of Whitby which is apparently the oldest river-front pub in London. Back into silent streets. It seems extraordinary to me that just off the guide-book highlight trails are these wonderful stretches of atmospheric city to explore but which are utterly empty - great!
I went to all of the stairs along this river-stretch where you can (carefully) climb down and sit on a weed-covered step and admire the pale brown waters of the river sloshing against ancient stone and wood. Actually, I was quite surprised you CAN do this - I'd imagined locked gates not just a polite warning sign suggesting care on slippy stone. 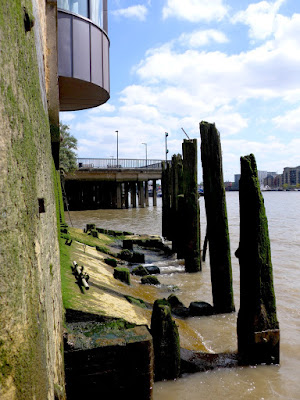 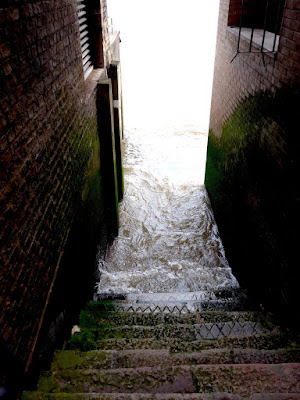 The painted sign above was on part of a building that I failed to take a picture of but of which, if I had an absurd amount of money, I would live in - a Georgian (?) block of flats with inner gardens and river view.
After Spotted Dick, (pudding, for those of you without knowledge of classic oldy English puds) custard and tea in the Ramsgate pub, I walked on and did find the Prospect of Whitby with its magnificent pewter bar and hang-noose outside above the river - someone told me the chief hangman used to partake of his lunch and regard the hangings, presumably to check they were being carried out with accuracy.

While walking past Metropolitan wharf I had a strong recollection of the point mine and two other peoples' lives might have taken a different turn (hello Mal, if you read this). At the time, living respectively in Streatham and somewhere in Brixton, we had a crazed idea to take on a whole floor of this building as an art studio/styling props place/photography studio/animation, etc. After doing (vaguely) the maths it certainly didn't add up so we dropped the idea - shame really as the place is now probably worth a zillion pounds at least. 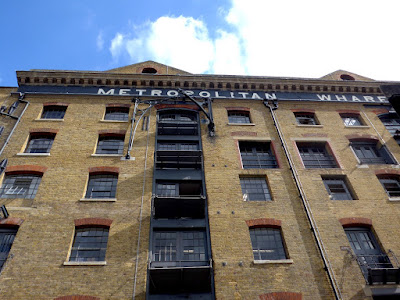 So, meandering on . . . lots more detours but an overwhelming urge to eat curry in Brick Lane pointed me in the direction of Spitalfields; a place I spent many years being an apprentice stylist and collecting an impressive bag of parking tickets (called up by housemate one morning and told to get down to Wells Street Magistrate court with a large wad of cash as there was a warrant out for my arrest . . .)

Posted by writing and other stuff at 22:55