Most of my wanderings tend to be London-based but on this trip back to see Mum in Wimborne I took the time to explore my teenage-years' town a little further.
Usually I stay with my lovely cousin up on the hill but as she was having work done in the house she had absurdly generously booked me a house by the river to stay in - despite my weedy protestings about finding a cheapo B and B somewhere.
A view on the river Stour - what a rare treat to wake every morning and see swans and reeds reflected in the slow-moving waters; I may have almost moved my desire of living with a sea view to a river view - either might be good. 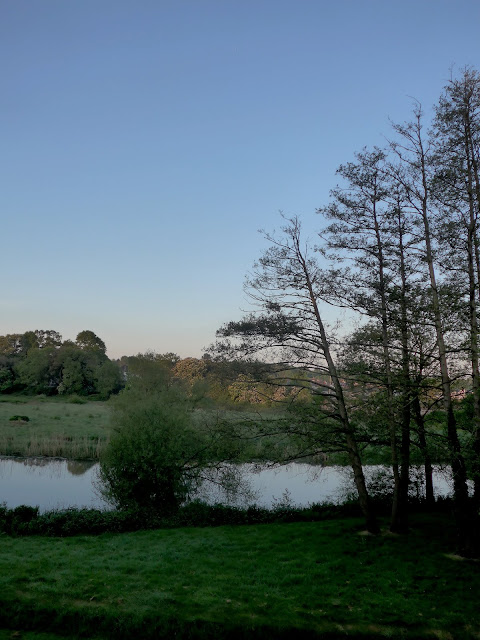 When I was about thirteen, Mum and I used to take a rowing boat out from the Hanham's Boat Yard and disappear up the river for hours - those holiday days that seemed to always be sun-filled. I can't recall who did the rowing but I did find a photo of her in her university rowing team - so possibly, more her - it's easy to forget that one's parent of nearly ninety and mostly clamped to a wheelchair used to do such things - and we shouldn't forget . . .

A different boat-hire place operates now with rather more strict rules about time and how far you are allowed to row to, but they were affable folk and when my friend came to stay for a couple of nights we hired a vessel, and rediscovered certain arm muscles.
Messing about in boats. Everything observed and heard from a boat is very different: the scale of trees, bridges, the plop of small animals and the skid of ducks' feet as they regain their watery territory. 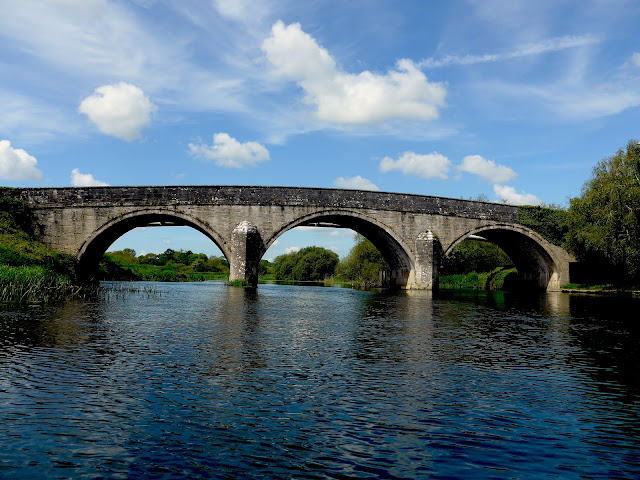 Even though I lived in Wimborne for about six years I never did actually explore the potential of its river-bank walking. I suppose my main walking was in the form of the daily traipses to and from school, (which were bordering on small hikes) at each end of the day, and favourite jaunts out to places like Badbury Rings, Chalbury Church and bits of the coast; the Stour wasn't really on my day-to-day walk radar.
So, in a house with view of river - where does it actually pass through and how far can you walk?
Boots on, I started near the boat place and paced a few miles discovering brand new swanky housing estates, water meadows full of early summer flowers and the most perfect little suspension bridge that leads over to Canford School - a prestigious place with a parking area full of Range Rovers and Mercedes. 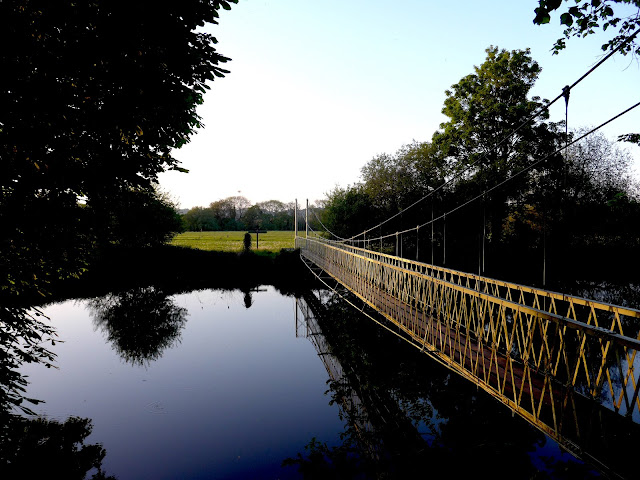 The spots visible in my photograph below were actually a few of the billions of Mayflies that were enjoying their twenty-four hours (or, perhaps to them, long lifespan involving relationships, where to eat, and musings on the meaning of life). 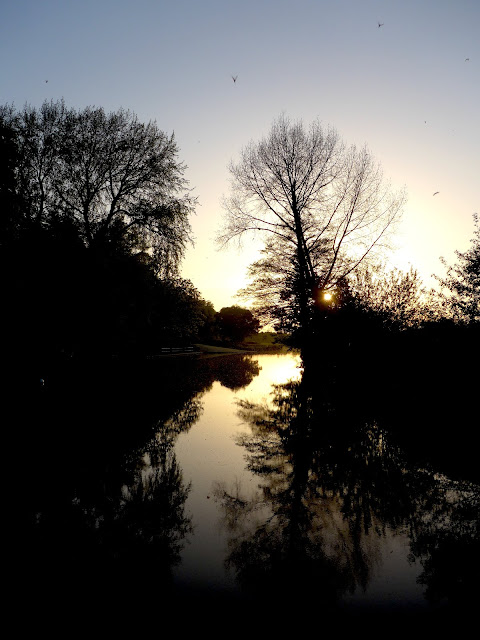 Taking the other direction the following day took me through a fine area of 1920/30s suburbia with some surviving original houses and many renovated dwellings - or large edifices where bungalows of that era once stood. If I'd had a freer day I might have walked on to the next village signposted - Lytchett Matravers - said, I believe, to be the longest village in the UK. I'm sure I read that somewhere but can't find it now. Anyway, the word Lychett comes from the Saxon word, Litchet, meaning Grey Wood. Rather Poetic. 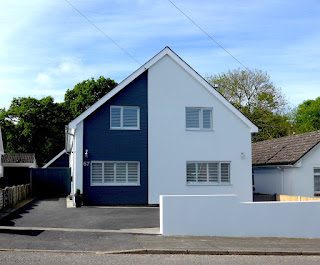 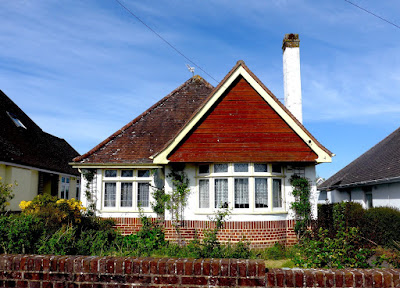 sadly this one was up for 'renovation' 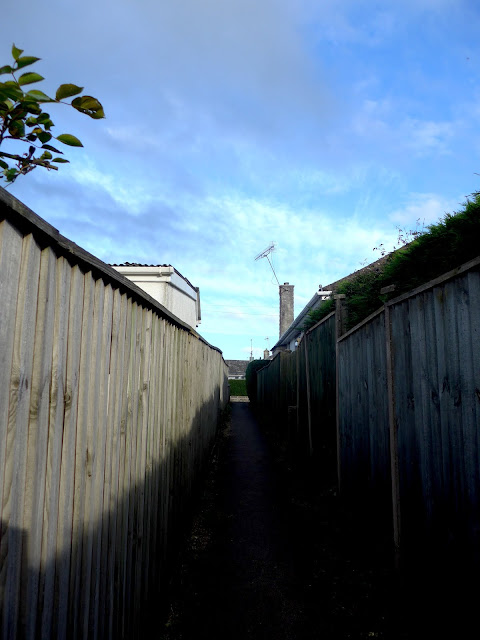 A beautiful snicket/ginnel - don't know the Dorset word for a thin path between houses. Maybe there isn't one.

Further mooching after seeing Mum in her home revealed such delights as a 2009 time capsule placed into the concrete of the new Stour Footbridge - to be opened in 2059. If one of my novels turns out to be a premonition, this momentous moment will not be recorded and put onto Facebook/Instagram, etc as the internet will have collapsed around 2038 - and this blog will be a slight and fading memory in my own head. Another reason for finding the time to make it into a REAL book. 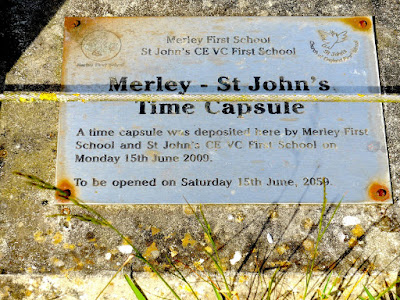 Other noted things: the pub I used to work in - and got fired from as I couldn't add up (no auto tills in those days), and a tree that I must have gawped at for about fifteen minutes. I've never even seen one of these in Kew Gardens. Sadly the tree's owner was out so I still don't know what it is. 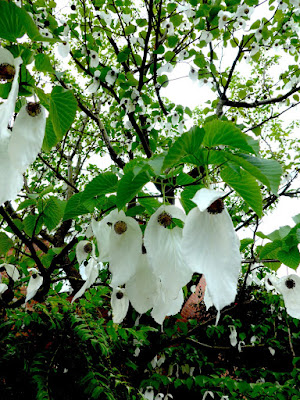 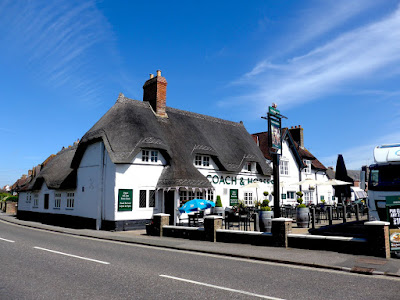 On one of the evenings my friend stayed, we drove to Studland via the clanking vehicular ferry at Sandbanks - a riveted metal wonderment that has been crossing the narrow stretch of water since 1994 - the original vessel started crossing in 1923. It's a magical stretch of land out towards Old Harry Rocks: grass with human tracks cut into the chalk, windblown scrubby trees and sheep - at that point with playful, bouncing lambs.
As the Pig on the Beach was fully booked we ate at the Baker's Arms where a massive chuck of tree smouldered in the fireplace and happy walkers/sightseers and locals quaffed pints of beer from, possibly, the wonderfully named, Piddle Brewing Company.
Our walk to the cliffs culminated in the most life-affirming sunset after which we took the Ferry back and interrogated two of the crew, one of whom had been doing the crossing for thirty years. 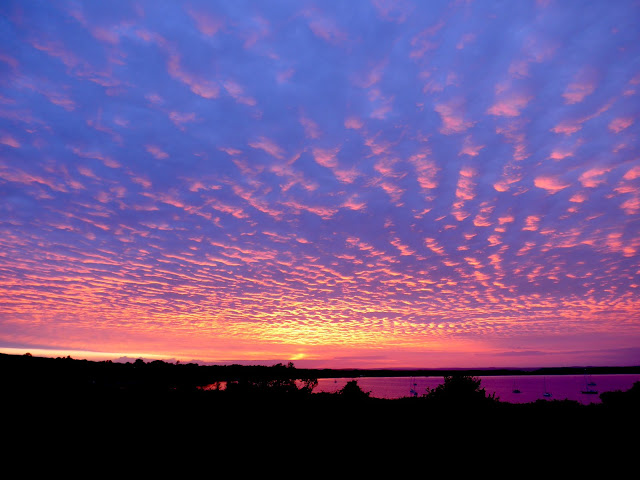 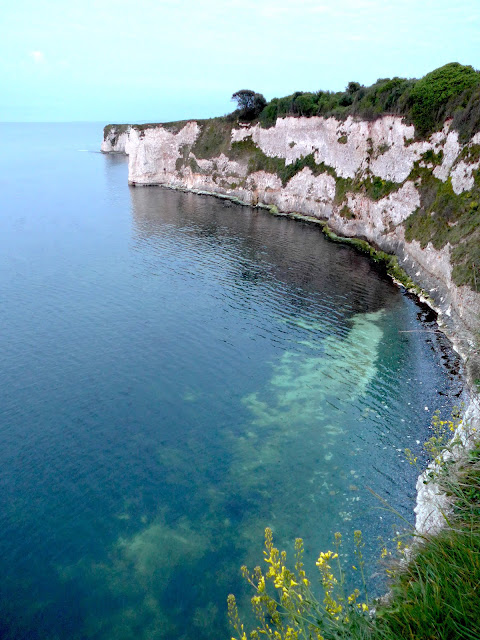 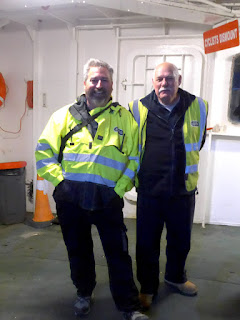 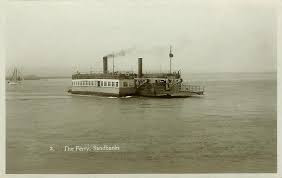 The days passed with Mum in the usual round of tea shops, (think I did get scone-poisoning on my last visit) church and river perambulations - the smaller, Bourne, river. We collected leaves, shells on the trip to the beach, flowers and seeds and exclaimed over Kingfishers, swans and many more surreal sightings. Mum often sees things that I can't - small dogs sitting in trees and the like, but who's to say if they aren't there? In fact, after a lengthy discussion with afore-mentioned friend about us all being particles and time not existing, maybe small dogs sitting in trees are as normal as anything else. 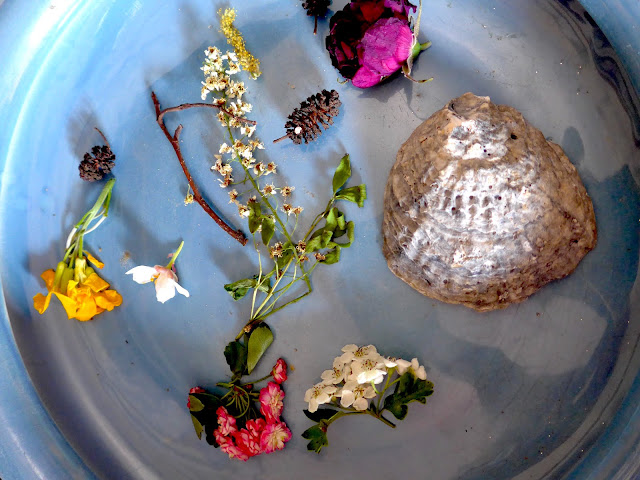 On the last evening, I left Mum in the Royal-Wedding festooned home's dining room and walked back to the river house for the last time. Two swans moved majestically down the Stour as I packed my suitcase and attempted to leave the gite as spotless as I had found it.

Posted by writing and other stuff at 07:21