I might have spent them (the hours) going through the in-tray, putting a wash on, walking into town and flipping through a few racks of clothes, food-shopping, editing, trawling the net, watching cat-antics on youtube, ticking off lists, clearing out the shed; all things that have to be done, or mostly have to be done, but instead, me and the lad went on one of our spontaneous road-trips. Sometimes these are a couple of days with a stay over somewhere or more usually an exploration of an unknown, to us, area.
I'd noticed the Pic du Nore over in the Black Mountains many times on driving to Carcassonne from our town. It rears baldly in the distance with a single spike marking its summit, the shape more reminiscent of a Yorkshire landscape peak. Ezra had wanted to go back to a certain dilapidated factory-lined road between Mazamet and St Pons so I suggested a trip encompassing it all.
Bag of shoes, snacks and maps assembled, we entered the noble filth-covered Kangoo and were on our way.
Space is big - really big, as Douglas Adams, or at least his character Zaphod Beeblebrox once said; I always recall this when traveling through tracts of French countryside. France is BIG, really big, and rich in varied geology and flora even in just one department. We drove miles through landscape that changed from gentle hills carpeted in grapevines to arid and rocky mountains, to beech-covered lush forested slopes, to lakes and Alpine plains, all, still within the Aude. 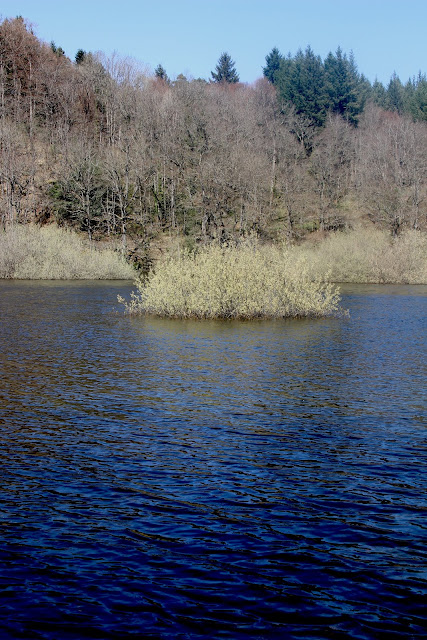 France, or at least this bit, is also incredibly underpopulated. I think in all those hours of travelling we only saw about twenty cars, a couple of cyclists and . . . a dog. It was lost, somewhere on a vertiginous mountain road, doing that thing that lost dogs, (and probably humans) do - staring jerkily about, running this way and that. Lad and I looked at each other, then I stopped the car, turned around, drove back and opened a door. The hound jumped in, settled down in one of the back footwells and I started to imagine a return journey home with our dogs not forming a welcoming committee.
We asked in a village if anyone was missing a hound but they weren't so St Pons where there was a vets seemed a good option. Boris, as I had temporarily named him, turned out to be Jasper when the kindly vet checked his 'chip', and happily for us, the trip wasn't curtailed - Jasper staying on at the practice until his owner turned up. 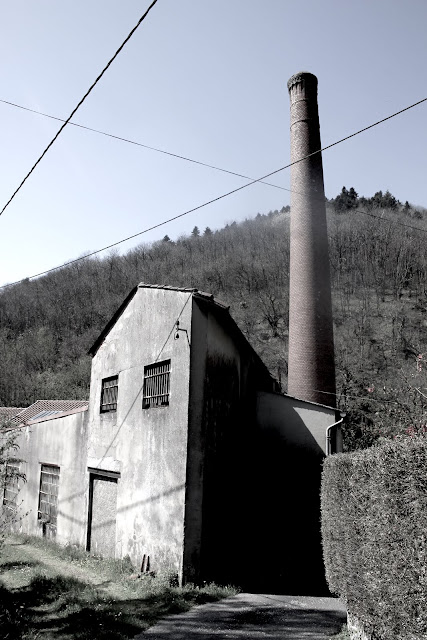 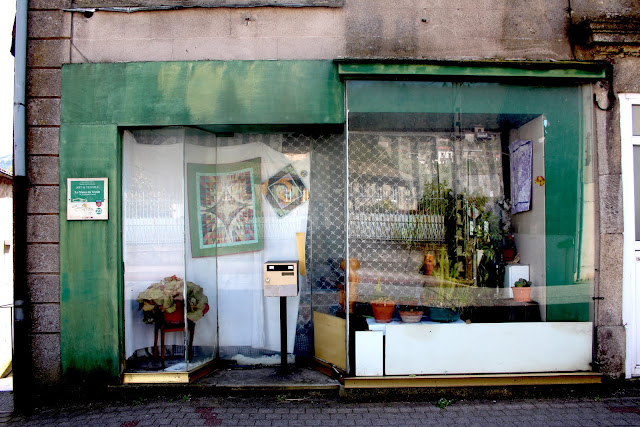 So, onward, along the factory road where we frequently stopped, photographed and admired various crumbling, art-inspiring edifices, culminating in a particularly melancholic little town. It had obviously once been prosperous while the various leather and timber industries along the river had flourished in the 50s and 60s, judging by the shopfronts that must have been de rigueur at that time.
We ate pizzas the size of a bus wheel - or Ezra did, in a friendly little eatery run by an enthusiastic Sicilian, explored the town and then drove on up the afore-mentioned pic.
At the top, all the wind in the Aude had gathered to welcome us, blowing seemingly from all directions - not a tree, even a bent-over one in sight; all flora was of the ground-hugging variety: bare winter-thrashed stems and stubborn grasses but surprises are up there - bright pink tiny orchids/cyclamen and violet pansies somehow attracting insects.
The small red and white rocket at the summit - viewed as a spike from far away, is actually part of a radio transmitter, (according to the blurb on a sign). It and all the other equipment having been up there since the mid 60s transmitting away various French radio stations to unknowing bods far below in the surrounding towns. 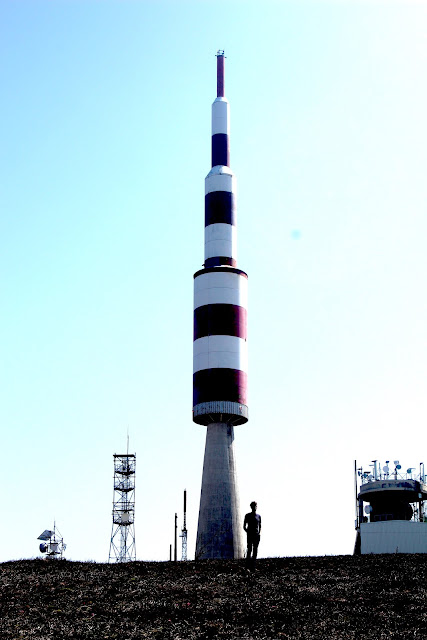 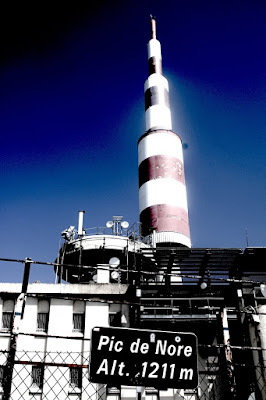 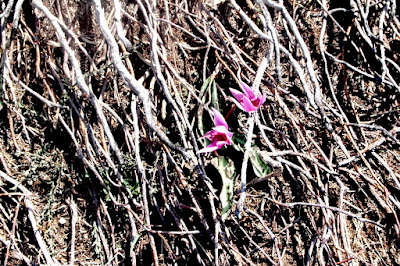 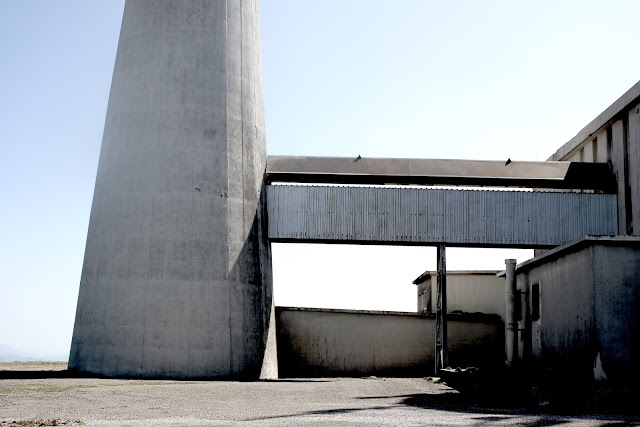 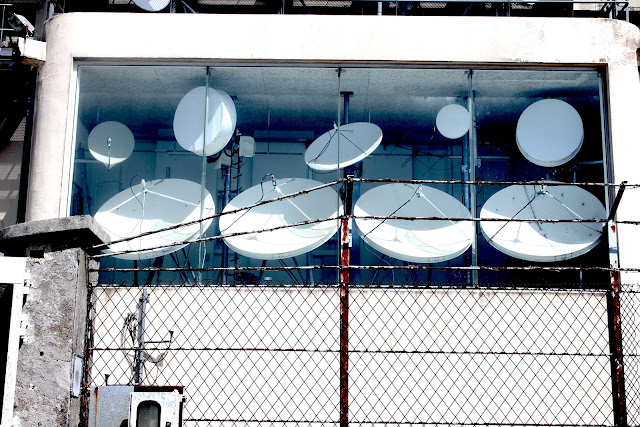 Ears aching from the gales, we walked around, admired the views and rejoined the car which was surprisingly still there then voyaged back down marvelling at the change in tree-species as we descended.
Tea required we went in a bar and experienced a pot of the French default blend - Yellow Label. Odd . . . if you make this at home it tastes of old air but in a café it's always surprisingly refreshing and even has a reasonable tea-taste. Maybe it's just the anticipation off a brew after a long journey or a walk, or it's the novelty of someone else's cup and saucer rather than a mug; maybe we'll never know and the cup of tea will just remain part of a happy set of memories from that particular day.
Posted by writing and other stuff at 05:11