The heroes in one of my 'work in progress' novels arrive on Earth after they are given a lift by a space-debris clearing vessel. Unable to say exactly where they will be dumped they find themselves in a bald and desperately hot bit of Death Valley.
See extract below.
While I was studying a map of said city (I have been there) I was curious as to what the very dark green areas within the city limits were - the rest of the colour pallet being mainly grey, beige, sandy, etc, as you might expect for a city built on a desert plain.
Golf courses.
I was fascinated and horrified, so then got completely side-tracked from the main story and spent an hour gawping at lavish, celluloid sites bragging about their golf ranges, pools, five star dining etc. How can this be allowed? Money, of course. But it's so extraordinary to more or less drape grass over sand, artificially landscape, and add elaborate water features/post modernist pilaster-encrusted buildings. In fact, the only 'natural' features might be the sand bunkers - but they are probably constructed with special white sand imported from elsewhere . . .
Even odder, I couldn't find anything much on the environmental impact of such places; tapping in: environment destruction by golf courses, and other attempts only produced one Guardian article and loads of YouTube videos of drone footage tours of the various SEVENTY or so Vegas courses, and films of grinning, overfed people taking a break from gambling and eating to stroll/buggy about on manicured grass.
Wonder how Lake Mead is doing these days. 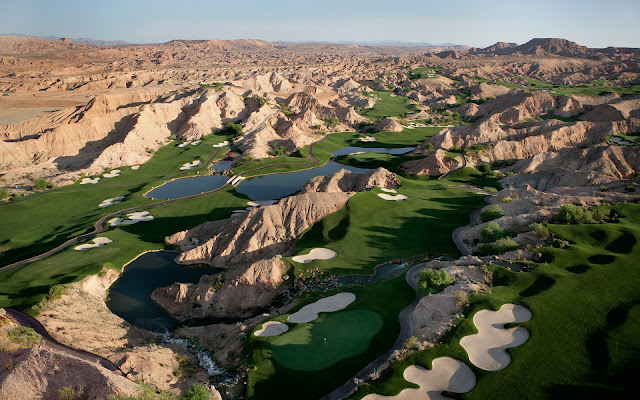 
I’m still not sure where we are.
No. I have no idea where we are. Ruby is sleeping in the shade of a scraggy tree – the only
one visible for some distance. It is intensely hot. Dry-hot. I feel worried that the
quantity of Bistanch’s version of water won’t be enough to keep us hydrated for long. The
arb, sun is high overhead and the silence is almost painful – just the humming of a breeze
through the needles of a vast cactus nearby and the maddening chirp of some lone insect.
Just as I’m wondering if the waste collecting crew might have misguidedly dumped us off
onto another planet, a plume of dust announces the arrival of a vehicle. I stick out a thumb,
which is what I believe Earth-dwellers do, and wait to see if the driver stops. The truck
slams to a halt spraying sand and grit. A sandy-haired female peers out at me.
“What in Heaven’s name s’yu doin’ out here?”
The truth is probably not the best answer. Err, “. . . Our car got stolen . . . and we were
drugged.”
“Don’t say! Where you heading?”
This is difficult as I don’t know where we are. I think perhaps feigning death or at least
shut-down might be good but then she might just drive off and leave us.
“The thing is, I can’t remember – think the drugs must have been really strong. And my
wife’s pregnant. You couldn’t take us to the nearest town, could you?”
“Vegas? Sure. That’s where I’m heading.”
“Vegas? Gambling, eating . . .”
“Oh, yeah . . . and bariatric surgery.”
“Right . . . what is that?”
“Jump in and I’ll tell ya. Need a hand with yer wife there?”
“No, that’s fine. Thanks.”
I run over to Ruby, pick up the bags, shake her awake and harsh-whisper: “We’re near
Las Vegas! Hurry, I got a lift – oh, and you’re pregnant.”
Ruby stares briefly at me then scrambles to her feet. “What?”
“I’ll explain later.”
The woman signals to throw the bags in the back and to join her at the front. She
watches Ruby strap herself in. “How many months you gone, Angel?”
“Just two,” improvises Ruby. “Thanks for this, it was getting so hot out there!”
“Yeah, sorry, not much better in here. Air-con’s a bit on the way out. So, yer partner there didn’t remember where the car gotten stolen.”
“Oh – it was Independence . . . do you live out here?”
“Sure do. Don’t like Vegas. Used to live in San Fran but there’s more call for what I do out here. Got me a little place at Indian Springs, and a cheap city hotel when I need it.”
“What do you do in Vegas?” asks Ruby.
“Was ‘bout to explain to him – Bariatric surgery.”
I glance around the grimy cab, note her weathered, brown hands.
“You operate on people?”
“Sure. Stomach reduction – biggest center for it in the states now.”
“So, people come to gamble and get their stomach . . . shrunk?”
“Stapled. Yup.”
Ruby and I fall silent and watch the parched landscape zip past. I wonder why this woman is driving a truck, and ask her.
“Bike got sand in the carburetor and wouldn’t start so Walt said to borrow this today. Hospital’s on the outskirts so I can park. Ya been to Vegas before?”
Ruby leans forward and raises a hand. “I have, some years ago.”
“Like it?”
“It was . . . interesting. But I didn’t imagine I’d be returning.”
“Ha! I’ll be getting out again soon as I’ve got enough to change direction.”
“To what?”
“Woodland burials.”
“Oh?”
“The way to go, honey.”
I look out again at the beige nothingness of the desert.
“Here?”
She laughs and slaps the steering wheel. “Of course not! Like I said, I’m outta here – back to Maine. Where I’m from. There ain’t no woods here, or much green, just the odd golf course – well, seventy actually.”
“Seventy?”